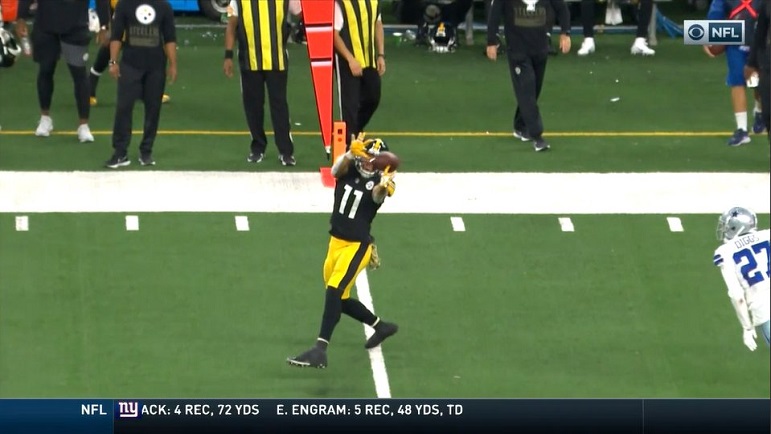 Today, however, I want to shift the focus on Roethlisberger’s 2020 passes that traveled 10-15 yards because that’s a distance that not a lot of people talk about and one that the Steelers quarterback really had issues with.

To start with some context, Roethlisberger was just 50.7% on throws 10-15 yards past the line of scrummage in 2020 and that was on 75 total pass attempts, according to Sports Info Solutions. How bad is that 50.7% completion percentage? Well. of the 15 NFL quarterbacks that attempted at least 70 pass attempts of 10-15 yards in 2020, Roethlisberger ranked 14th in completion percentage. To add more context, Los Angeles Chargers quarterback Justin Herbert was ranked 13th with a 55.8% completion rate while Carson Wentz, who was with the Philadelphia Eagles in 2020, ranked 15th with a 47.4% completion rate.

Because Roethlisberger had such a poor completion percentage on throws of 10-15 yards past the line of scrimmage in 2020, I figured I would take the time to go through each one of his incompletions, 37 in total, to see how many were on him and if his overall play on those throws was as bad as his percentage says. I’m glad I did that and below is the contextualized data of all 37 incompletions of throws deemed 10-15 yards past the line of scrimmage by SIS.

The first thing that should stick out to everyone is the fact that seven of these incompletions were the result of the targets dropping the football. I reached out to several of our site contributors on these as well so as to not let my own subjectiveness rule. Excusing Roethlisberger on those seven incompletions makes a huge difference in what his overall completion percentage should have been on throws 10-15 yards down the field in 2020.

Now, Roethlisberger did have some incompletions that were the result of his throws being off target or overall bad decisions on his part. a few others were incomplete because the defender got to connection point in time to break it up. In short, Roethlisberger was far from percent on these 37 total incompletions.

In closing, my overarching takeaway after contextualizing these 37 incompletions is that Roethlisberger’s supporting cast played a big role in the quarterback’s completion percentage being so low. Quite honestly, one can easily argue that Roethlisberger adjusted completion percentage on these 75 total attempts should be around 65%, which would have ranked him fourth overall on the list of 15 quarterbacks I mentioned earlier in this post.

Can Roethlisberger get his completion percentage back to 62% or better in 2021 on throws of 10-15 yards down the field? He’ll certainly need to if the Steelers offense expects have any sort of consistent play in 2021. Based on what I saw in Roethlisberger’s 2020 tape on such throws, he should be able to get back to at least a 62% completion rate on such throws in 2021 as long as supporting cast improves on the receiving end of such throws.