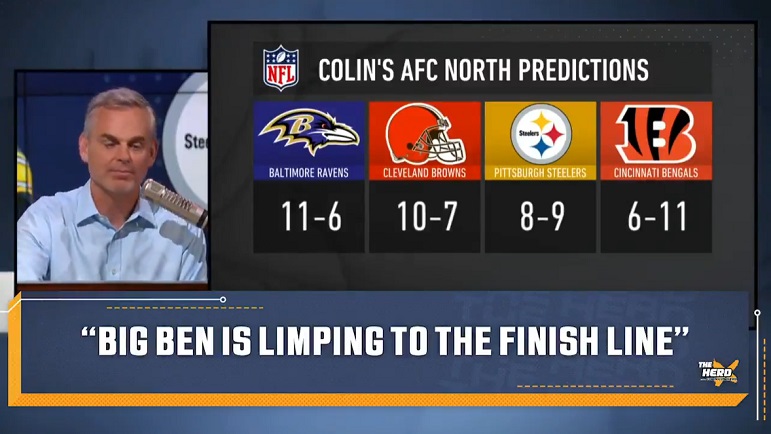 Man, Colin Cowherd of Fox Sports 1 sure knows how to rile up fans of the Pittsburgh Steelers. Quite honestly, he and Adam Schein of CBS Sports can do that like nobody else in the media when it comes to hot takes on a national level. Earlier on Wednesday, I passed along comments made by Cowherd during his show promo about Steelers quarterback Ben Roethlisberger reportedly being in fantastic shape ahead of training camp and now I will pass along what he said during his show about his record prediction for the team in 2021.

“Without going into deep explanations, I have the Pittsburgh Steelers as a sub 500 team in third place,” Cowherd said. “And eight wins, I think considering the state of their o-line, is being gracious. That’s an 8-9 football team.”

Well, Cowherd did have the Steelers going 7-9 last season and they ultimately went 12-4. So, yeah, he was not remotely close to being right.

Prior to giving his 2021 record prediction for the Steelers, Cowherd made sure to take a few more shots at Roethlisberger for good measure.

“Big Ben, reportedly in the best shape of his life, according to sources,” Cowherd started. “According to Ben’s camp, he is losing weight. Is his elbow in better shape, is the question I worry about? And I’ve never really thought the Steelers would be better if Big Ben was skinnier. That’s not something I’ve worried about. He’s a big guy. The question that begs to be asked is, what took so long? Losing weight means you needed to lose weight. As a professional athlete, I think LeBron [James] Russell Wilson and Tom Brady, and [Patrick] Mahomes have moved past the ‘I’ve got to lose weight this offseason.’ So, congratulations on only two Natty lights after dinner and sit-ups.”

Ouch. How is that for a hot take? Too funny.

Wait, did he just say that he does not care if Roethlisberger is skinnier or not? Which way is he going here? Should Roethlisberger be big or skinny?

Cowherd then proceeded to compare Roethlisberger to an old house that hasn’t been kept up and attempting to be sold for top dollar.

“But this the classic; you want to sell your house and you never really invested in it for 20 years,” Cowherd said. “You’ let the plumbing go, the air conditioning unit, the landscaping, but you put some new paint on the house, and you think you’re going to fool people and sell it for top dollar. Well, you’re not going to fool a savvy investor or a savvy home buyer, and you’re not going to fool an inspector because you put on some nice paint. Okay?”

Cowherd then took more shots at Roethlisberger and his preparation regime and part of that included him saying how the Steelers quarterback fails to compare to other high profile signal callers in the NFL.

“Brady is a 24-7, 365 day a year quarterback and he is sprinting to the finish. Ben is committed when the whistle blows in camp to when it ends in January, earlier than everybody in Pittsburgh wants. He’s limping to the finish line. You can’t fool an inspector on a house. You can’t fool somebody that knows real estate on a coat of paint. You fool dopes and you can’t fool people who know football because now you’re doing sit-ups and you’ve cut back on your Old Milwaukee’s after dinner.”

Well, does this mean that Cowherd was a dope last year? Sure, Roethlisberger wasn’t deserving of All-Pro or Pro Bowl honors, but he did lead the Steelers to the AFC North title. That’s way more than what Cowherd expected in 2020.

Save these receipts in case you need them and make room for several more before the 2021 season gets underway.

"I have the Pittsburgh Steelers as a sub .500 team in 3rd place in the AFC North. 8 wins is being gracious."