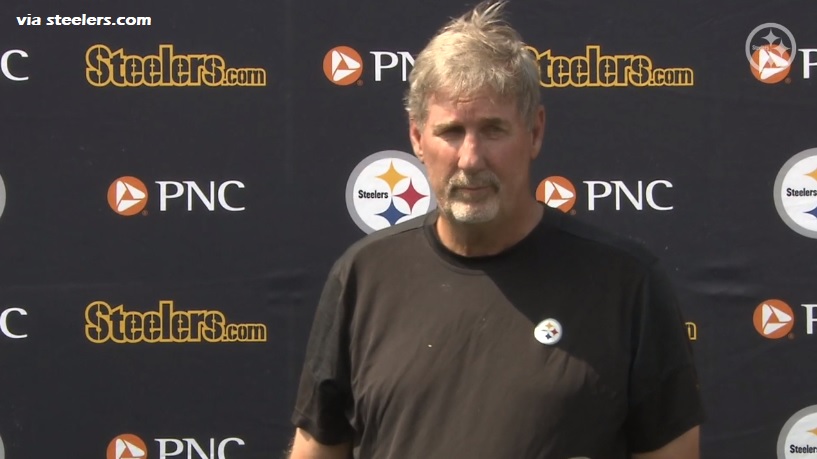 Several weeks ago, Pittsburgh Steelers defensive coordinator Keith Butler strongly hinted that the team might be on the lookout for another outside linebacker with experience. Well, that hint turned into the Steelers signing veteran free agent Melvin Ingram to a one-year, $4 million contract several days ago. With Ingram now in Pittsburgh, a lot of people are wondering if he’ll be given a chance to compete against second year outside linebacker Alex Highsmith during training camp for the right to be the team’s starter opposite T.J. Watt.

Butler met the media after Friday’s training camp practice and during his question-and-answer session he was asked if it’s now an open competition between Ingram and Highsmith moving forward or if the former was signed to be just a backup role player.

“Well, you always want to have three guys that can play,” Butler said. “We did last year. Alex came in and did a good job filling that role when Bud [Dupree] was here. So, we played all three of them quite a bit. We think we’ve got three now that are gonna be capable of playing for us. So, we can rest each other.”

Butler was then asked directly if expects Highsmith to maintain the starting role opposite Watt, which is the way he ended his rookie season after Bud Dupree was lost for good in Week 12 to a knee injury.

While Butler wasn’t ready to tip his hand on whether or not he has plans to start Ingram over Highsmith or vice versa, he did admit that it’s possibly that we occasionally see all the team’s top three outside linebackers on the field at the same time in 2021.

“We did it a couple times,” Butler said.

So, is that something that Butler’s planning on doing in 2021?

“Well, not if we’ve got [Stephon] Tuitt, no,” Butler said. “If we have Tuitt, I’d rather see a true four-man, two outside guys, two inside guys, like that. If you want to do that, it’s going to have to be a third and long situation. In different situations there’s a possibility you can do that. There always is. But right now, can we put all three of them on the field at the same time? Yeah, we’ve done that stuff before. Does it help us? Not in mixed downs. What I mean by mixed downs is first and seconds downs, third down maybe. Maybe.”

I’m not so sure Butler has things straight here in his answer. In case you’re curious, our charting from last season shows that the Steelers had three outside linebackers on the field at the same time for 22 plays in total. Two of those 22 plays were third downs, and neither were long situations. So, it didn’t happen much on third down and mostly happened on the mixed downs, first and second, as Butler referred to them as. He basically said that a defensive package with three outside linebackers doesn’t work on first and second downs. But it works on 3rd down. That, however, goes against the way the team used it in 2020. Maybe Butler is just conveying his thoughts wrong here.

Butler was also asked if Highsmith will mainly be asked to play on the right side in 2021.

“He played both sides last year, Butler said if the teams 2020 third round draft pick out of Charlotte. “And Melvin played both sides. So, both have done that. I’m not worried about which is playing which. Both might be in there at the same time, and they probably will because we’re going to rest T.J. [Watt] some, too. So, we feel like we’ve got three good players there and hopefully, that will help us in terms of keeping the same numbers in our pass rush in terms of sacks and stuff like that. Hopefully we’ll do that.”

Until we have a real reason to think otherwise, Highsmith still seems slated to be the starter opposite Watt come Week 1 of the 2021 regular season. What’s also clear is that Ingram will play a lot in 2021, either as the starter opposite Watt, or as a backup rotational piece. We are also likely to see all three of Watt, Highsmith, and Ingram on the field on an extremely limited basis in 2021 with most of those times being obvious passing downs.

With training camp now underway, Butler just plans on sitting back and watching how things go with Highsmith and Ingram so he can devise some sort of plan as to who will start over who and how much rotation he plans to use.

“I’m not going to expect anything,” Butler said on Friday. “I’m just going to watch them. So, we’ll see.”