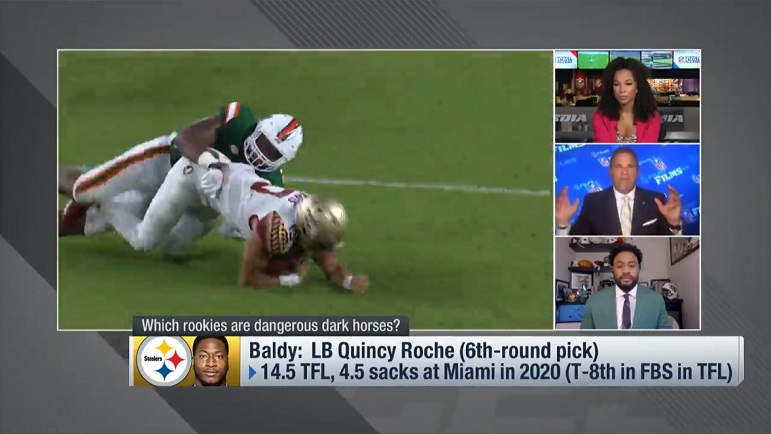 The Pittsburgh Steelers selected outside linebacker Quincy Roche in the sixth-round of the 2021 NFL Draft several months ago and, on the surface, it looks like they got a lot of value with that pick, especially with most respected draftniks believing he was bound to go off the board a few rounds earlier than he did. Because of where he was ultimately drafted this year, should Roche be considered one of the NFL’s dark-horse rookies to watch out for in 2021? Brian Baldinger of the NFL Network certainly believes so.

Baldinger had no problem naming Roche as his pick as a dark-horse rookie to watch out for in 2021 during a Thursday segment on ‘NFL Total Access‘.

“Well, I’ve got one for you; Quincy Roche out of The U, [University of Miami]” Baldinger said. “Now, he played his first four years at Temple where he was the American Athletic Conference player of the year in 2019. Had another year eligibility, went down to The U, I thought he was the best pure pass rusher at The U, despite the fact they had two number one picks coming out of there. I think he’s a little besmirched by that. The Pittsburgh Steelers find ways to find players later in the rounds that become big name players. They’ve got to replace Bud Dupree. I believe Quincy Roche will be one of those players that will go a pretty good ways to try and replace the level of play that Bud Dupree had over the last four years.”

While I certainly am on board with Baldinger’s excitement about Roche and his future in Pittsburgh, it might be a little early still to suggest that the rookie will help the Steelers defense replace the level of play that former outside linebacker Bud Dupree provided the last few seasons. After all, the Steelers have outside linebacker Alex Highsmith poised to take over Dupree’s spot on the right side in 2021 after he represented himself well during his rookie season. Highsmith, who was the team’s third-round selection in the 2020 NFL Draft, will be counted on to play quite extensively opposite fellow starting outside linebacker T.J. Watt in 2021.

The Steelers defense will, however, need a third outside linebacker to occasionally relieve both Highsmith and Watt in 2021 the way the former did in 2020. Can Roche quickly assume such a role as rookie? We’ll soon find out. The Steelers do also have veteran outside linebacker Cassius Marsh on their 90-man roster and before training camp gets underway, he logically would be ahead of Roche on the team’s depth chart. Can Roche show enough in training camp and the preseason to warrant him passing up Marsh? It’s certainly not out of the question because quite honestly, that’s not a high bar that the rookie needs to clear.

We should quickly get an idea about what the Steelers really think about Roche in the next seven weeks or so. If the Steelers don’t add another experienced outside linebacker on the cheap between now and the start of the regular season, that should serve as a positive sign when it comes to how the coaches feel about Roche and him possibly contributing on defense right out of the chute.

If, however, the Steelers do wind up adding another experienced outside linebacker in the coming months, we can then probably expect to see Roche mainly playing on special teams for at least the first half or so of his rookie season.

Regardless of how things go these next several weeks, Baldinger is right, Roche certainly will be a player that Steelers fans might want to pay close attention to during training camp practices and preseason games.