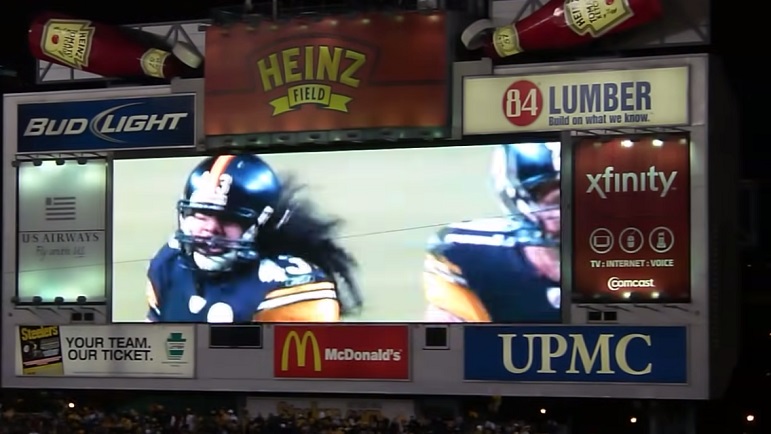 What is the best playoff atmosphere in sports? That was a question the panel was asked Friday morning on ESPN’s ‘First Take’ show and former NFL linebacker Bart Scott had an answer that takes the cake.

“For me, it has to be Pittsburgh,” Scott said. “The Pittsburgh Steelers have the best atmosphere. I mean, anybody’s that’s ever played there during a regular season, let alone the playoffs, when you get to the third quarter there’s something that they do. There’s a little man that comes out and he’s dragging some piece of steel and they play STYX [Renegade]. Man, I’ve watched many of my quarterbacks poop their pants in the third quarter and I’m like, ‘just punt the damn ball.’ I watched Ryan Clark hit Willis McGahee so hard after that damn song came on that they both knocked each other out, man. I tell you what, these kids are crazy. Pittsburgh is the only place that I’ve ever been mooned by a 70-year-old grandma. Looked like a California raisin, that wrinkled butt.”

Scott was asked to explain him that mooning incident in more detail.

I imagine that would haunt him. Too funny.

Scott should know what he’s talking about. After all, he played in two AFC Championship Games at Heinz Field against the Steelers during his career, and he was on the losing team both times. During the regular season, Scott was 2-7 against the Steelers at Heinz Field as a member of the New York Jets and Baltimore Ravens. So, yeah, he’s probably heard the song ‘Renegade’ by STYX enough for his lifetime by now.

As for that hit by former Steelers safety Ryan Clark on Ravens running back Willis McGahee that Scott referenced that clip is below.

Long live Steelers fans, Renegade, Heinz Field, and that lady that mooned Scott. What a great story on this Friday.