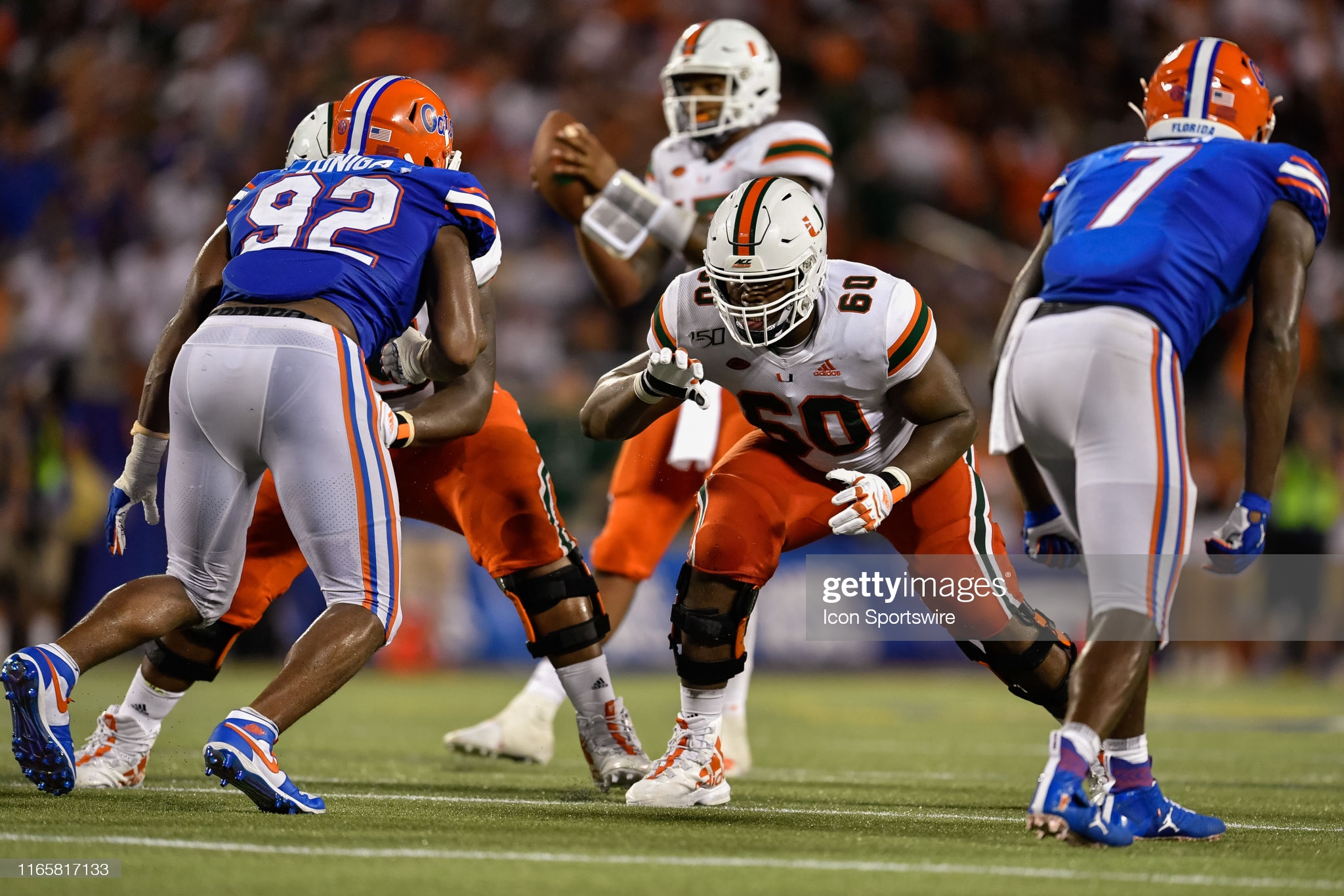 Normally, published on Sundays, violent storms and resulting effects pushed the latest edition of the mock draft roundup back 24 hours this week. So rather than ending the weekend with it, it helps start off the work week. And in this edition, a couple of quarterbacks make repeat appearances, though one not in the situation you would expect.

That first mock draft is a two-rounder from Luke Easterling, editor of USA Today’s NFL Draft Wire. One of the most frequent updaters of his mocks during the offseason, Easterling does have Pittsburgh finding a replacement for Ben Roethlisberger, but not in the first round. In the first round, he has Pittsburgh finding a blind side protector first, in Miami’s (Florida) Zion Nelson.

Nelson is a name new to the 2021 roundups for Pittsburgh, but not to the first round in looks ahead to 2022. One of the consensus top tackle prospects ahead of this upcoming college season, Nelson is competing with players like Alabama’s Evan Neal and Mississippi State’s Charles Cross to be the top tackle prospect in the class at this point.

Cross has already appeared in a roundup as a first-round pick for the Steelers. And while quarterbacks still dominate the first round projections for a team playing its final season with Ben Roethlisberger and no long-term replacement ready behind him, among all other positions floated to the Steelers in first-round mocks, tackle is the most popular.

Neither Steeler tackle in 2021 is a sure thing to earn the spot long-term. Right tackle Zach Banner is coming off a season-ending injury, while left tackle Chukwuma Okorafor did not play well as Banner’s replacement last year. Easterling did not provide explanations for his picks, but the need is obvious for the Steelers. For a team with a new franchise face starting at quarterback next season, dependable pass blocking is crucial. Getting one of the blue-chippers of the class is a major step to helping ensure the success of whoever is passing.

Easterling mocked five quarterbacks in the first round. All of them went ahead of the Steelers’ pick at 14th overall, possibly influencing the decision to go tackle in the first. But he didn’t leave the team without a new passer. In the second round, Easterling mocked Ole Miss quarterback Matt Corral to the Steelers 46th overall. The surprise is not that Pittsburgh is getting a QB, or even Corral, a name linked to the team in other drafts. It is that the Steelers are getting him in the second round.

Corral is a potential first-round name, possessing no shortage of tools or upside. He also possesses a lengthy list of interceptions and poor decisions made trying to do too much on plays in college. Those are a main reason why his name is not often in the discussion to be one of the first passers drafted, behind the likes of Oklahoma’s Spencer Rattler and North Carolina’s Sam Howell.

Another name above Corral’s often in mocks is Nevada’s Carson Strong. And Strong is another name that has appeared for the Steelers in these roundups before, and does so again today courtesy of Bleacher Report’s Brent Sobleski, who had this to say about making Strong the replacement for Big Ben at 14th overall:

“At 6’4” and 215 pounds with a rocket strapped to his right shoulder, the reigning Mountain West Offensive Player of the Year will almost certainly fly up draft boards if he builds upon his sophomore campaign. Strong completed 70.1 percent of his passes last season with a 27-to-4 touchdown-to-interception ratio in nine games.

The Pittsburgh Steelers are an obvious landing spot as Ben Roethlisberger nears retirement. The two-time Super Bowl champion is 39 and on the last year of his contract. Pittsburgh must move on next offseason and find a new franchise quarterback.”

Sobleski mentions the possibility of the team forcing the pick just to get a quarterback, after he mocked four QBs ahead of Pittsburgh’s selection. Strong, though, fits a lot of what Pittsburgh would want in its next passer. Specifically, plenty of arm talent and size. He and Roethlisberger both measured at 6’4″ in school, though Strong’s 215 pounds come in over 20 below Roethlisberger’s 241 out of school, and are also a little below the majority of recent QBs at the NFL Combine.

Like Corral, Strong is a name that can rocket up the board to compete for No. 1 overall with a great season, or crash out of the first round entirely with regression or continued struggles this fall.