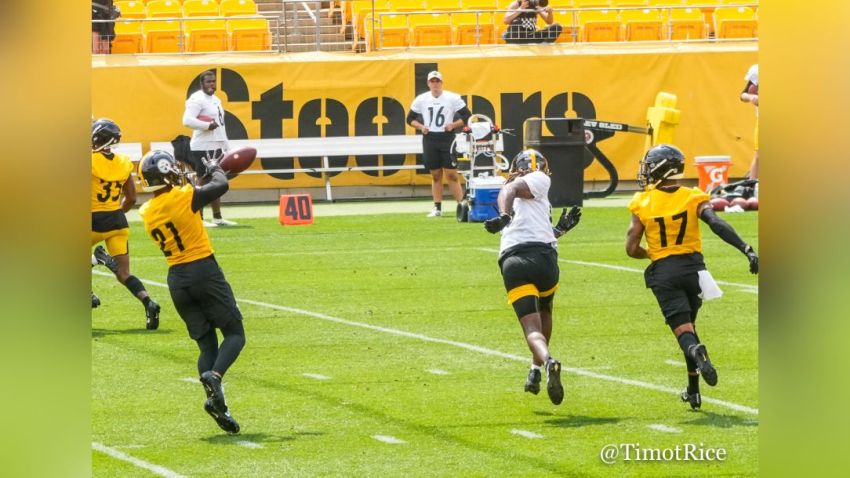 Reasoning: The seventh-round pick was drafted for his potential to be a playmaker, and he made some plays yesterday, including two interceptions.

It’s pretty simple. If you’re a guy a team took a flyer on because you have a defining trait that could help you stand out, then you’d better refine that trait and draw attention to yourself. We see that a lot with end-of-draft picks like seventh-round safety Tre Norwood. To his credit, he has been doing that so far.

There have actually been positive reports about Norwood’s performance going back to OTAs. All indications are that he has continued that in training camp. It’s still very early in the process, with the preseason games being the biggest measuring stick, but the rookie is clearly off to a good start in positioning himself for a roster spot.

It helps when you can pick off a couple of passes in practice, which is what he did yesterday. He finished his college career with a five-interception season, which is the principle reason, combined with his versatility throughout the secondary, that the Steelers draft him.

After losing Sean Davis and not re-signing Jordan Dangerfield, the team desperately needs to find new safety depth. Norwood entered training camp listed on the first official depth chart as the direct backup to Minkah Fitzpatrick at free safety, and really, he’s the player on the roster who best profiles to play the free safety position.

In addition to free agent special teams signee Miles Killebrew, the only other depth safeties on the roster are a pair of rookie college free agents in Donovan Stiner and Lamont Wade. So far, the draft pick has seemingly been able to jump in front of the pack.

Head coach Mike Tomlin likes his potential to be versatile so much that when he personally announced the selection back in May, he called Norwood a Swiss Army knife. To date, however, he made it clear that they are trying to get him anchored at safety to start off. The time will come down the line when they start moving him around. As always, the warnings apply, it’s early, but so far, so good.