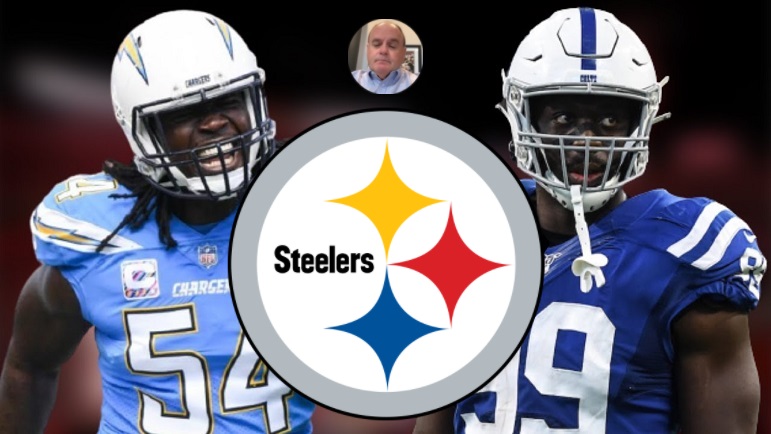 Are you ready to see the Pittsburgh Steelers sign a veteran outside linebacker such as Justin Houston or Melvin Ingram? I bet most of you are and especially on the heels of there being three or so posts a week on the internet suggesting such moves. Look, I would live to see the Steelers sign a veteran outside linebacker for depth as well and for as cheap possible but when it comes to players over 30 years of age such as Houston and Ingram, I’m here to tell you that such moves just aren’t likely going to happen. Why? Because Steelers general manager Kevin Colbert has zero history of adding defensive players such as Houston an Ingram this late in the offseason.

It seems I must remind everyone every few years or so about the Steelers history of signing defensive free agents who are 30 years or older and who have never played for the organization before during every offseason. Why? Because Colbert has zero history of signing such players. Can any of you reading this post name me defensive free agent player that Colbert signed during any one offseason who was 30 years or older at the time? No, James Harrison and Willie Williams do not count as both previously played for the team. We’re talking 20 years of history here and that’s quite a trend.

So, trends are made to be broken, right? Well, I guess. After all, Colbert did select a cornerback in the first round of the 2016 NFL Draft and that was the first time such a thing had happened since he arrived in Pittsburgh. How did that trend-breaker work out?

On the other side of the busted trend coin, Colbert did trade away a first-round draft pick to get safety Minkah Fitzpatrick a few weeks into the 2019 regular season and that move was a huge trend-breaker when it comes to the Steelers organization. That trend-buster, unlike the first-round cornerback one, worked out swell.

So, what would it take for Colbert to break his trend when it comes to signing a defensive free agent over the age of 30 and for more than minimum? Unfortunately, an injury to one of the team’s two starting outside linebackers, T.J. Watt and Alex Highsmith. How many of you want to see that happen? I’m guessing not many. If such an unfortunate thing were to happen such as that, I would guess that Ingram, not Houston, would be the first player that Colbert would call, even though he is the older one of the two.

Assuming Watt and Highsmith stay healthy the remainder of the summer, it’s really hard to imagine a player such as Houston or Ingram being signed just to provide depth. Neither of those two players play a lick of special teams and neither are likely to sign for the NFL minimum to play just 12 snaps a game to boot.

Do the Steelers still need to add outside linebacker depth before the start of the regular season? Absolutely they do, in my honest opinion, and that still might happen. If it does ultimately happen, however, expect the outside linebacker addition to be under the age of 30 with some special teams ability to boot. Such a move might come via a late offseason trade or claim off waivers as that’s Colbert’s modus operandi.

In closing, and baring injuries to either Watt or Highsmith during training camp and the preseason, there’s a better chance that the Steelers would bring a 43-year-old Harrison back before the team would sign either Houston or Ingram.