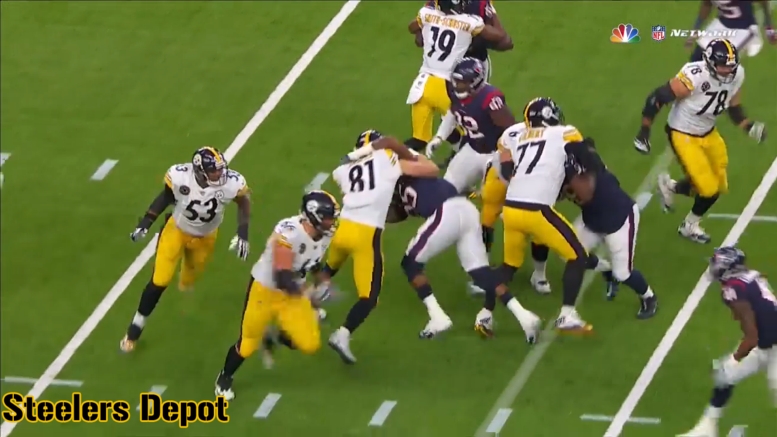 The Pittsburgh Steelers have promoted a common message throughout the offseason, which is that it is their priority to improve their run game, and a part of that will be emphasizing physicality, in all phases. They promoted Adrian Klemm to head offensive line coach to install an aggressive mentality into that area of the game, but it will be an 11-man commitment every time they’re on the field to run the ball.

Wide receivers coach Ike Hilliard understands that the onus is even on his men to carry their part of the load when it comes to executing in the running game. The Steelers have some bigger-bodied receivers, and he knows that they need to throw their bodies around.

“Our guys that have size need to utilize that, with JuJu [Smith-Schuster] and Chase [Claypool], and our other guys in terms of physicality, whether it’s in the run or pass game, it all starts with hand usage and fits”, he told reporters earlier today.

“With the running game, we all know we want to improve”, he continued. “A big component of that is what we’re gonna do on the perimeter as a receiver group, so we’re gonna have to make our fits, blocking safeties and corners, in order to help our running backs get off”.

The better running teams in the league tend to have a philosophical commitment to succeeding in this area, and get every position group to buy in, including the wide receivers. In theory, that shouldn’t be too hard of a sell for the Steelers, who have had guys like Smith-Schuster, James Washington, and Claypool line up in-line before.

With the exceptions of Diontae Johnson and Ray-Ray McCloud, these are guys who have been on record talking about how much they welcome and embrace the physical components of the game. All three of those mentioned talked about it coming out of college. Some have highlighted blocks that they’ve made on social media.

Now it’s time to put that mindset into action in turning around the run game. A strong blocking net on the perimeter can turn a commonplace run into a big gain, something the Steelers have been among the very worst in producing over the past several years.

Of course, physicality benefits wide receivers in their own department, and Hilliard wants to see improvement there, saying that he wants his guys to “continue to grow in that area in press coverage where we get off the line of scrimmage so we can get down the field and execute our assignments”.

It’s evident that the team has gotten too far away from the physical realities of the game in recent years. They’re trying to do a hard reset this year, and it seems that the entire coaching staff—much of which, admittedly, is changed—is buying in to that commitment.