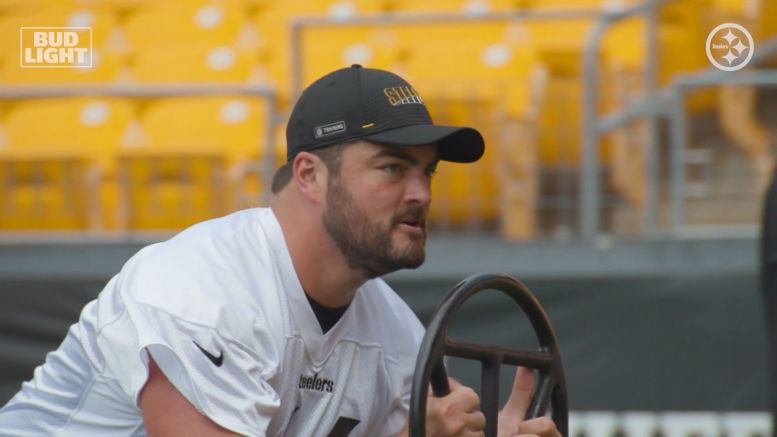 The time between mandatory minicamp and the start of training camp is usually a vacuum when it comes to NFL news. Most of the free agents have been signed and there’s no bombshell reports. But that was very different last Thursday, when the Steelers announced that they release Pro Bowl G David DeCastro, who still had a year left on his contract. At the time, there was speculation about a nagging ankle issue, but no one was really sure what happened.

The following day we found out. DeCastro, texting with Joe Starkey of the Pittsburgh Post-Gazette, revealed that he has ongoing issues with his ankle and will require another surgery to deal with some bone spurs. He was hoping that time would allow him to recover following his last surgery early in 2020, but he continued to have pain and an MRI done during minicamp indicated that his bone spurs had returned.

DeCastro said that he will need the surgery to alleviate the pain whether he can return to the NFL or if he has already played his last snap and that he expects his recovery would be a few months. This is obviously why the Steelers released him, knowing that it was unlikely he could contribute on the field until late in the season, and that would have been a best case scenario.

Since he was drafted back in 2012, DeCastro has been one of the most consistent players on the offensive line. He got off to a rocky start as a rookie, suffering a right MCL tear and dislocated kneecap in the preseason that required surgery and delayed his debut until Week 14. He played in all four remaining games and returned for his second season as the starting right guard.

It was in Week 8 against the Oakland (now Las Vegas) Raiders that DeCastro was rolled up on and left the game with a right ankle injury. While he missed only one game the following week and had a solid season, this was almost certainly where his ankle issues began.

Amazingly, DeCastro didn’t miss any playing time until 2018, when he suffered a right hand injury in the season opener against the Browns (which ended in a tie, considered a loss in Pittsburgh, and a win in Cleveland). DeCastro finished the game but sat out the next two. He didn’t require surgery and made his return in Week 4.

In the year without a Roethlisberger, DeCastro started and finished every game. His most important play was probably keeping a certain Browns pass rusher from getting killed after the whistle.

2020 was a different story. With Big Ben back, the O-line was never more important but the team had to start the season without the starting right guard due to a knee injury. DeCastro finally made his first start in Week 3 but then sustained an abdominal muscle injury, leaving him on the sidelines in Week 6. He was back the following week, but it was a rough year and he never truly returned to form.

And now DeCastro has become a free agent a year sooner than he expected and is looking at ankle surgery #3. We know that he had surgery in January 2020, but it’s a mystery as to when the first one occurred. And it probably doesn’t matter. The main issue is that following his most recent surgery, his ankle has bothered him for the past 1 1/2 years, meaning that he played through it all last season. What a warrior.

So what is DeCastro facing? And what the heck are bone spurs anyway?

A bone spur, technically known as an osteophyte, is growth that occurs on bone. They develop over time and are usually found in a joint where two or more bones meet. The most common cause is joint damage from arthritis or injury, particularly to tendons or ligaments (i.e., not so much after actual fractures). Surprisingly, bone spurs are often asymptomatic and are only found on X-rays done for other reasons. When bone spurs do cause pain, it is due to the spur putting pressure on a nerve, a tendon, a ligament or another bone. They can also cause numbness, tingling, muscle spasms and weakness.

Here are two examples of bone spurs seen on X-ray: 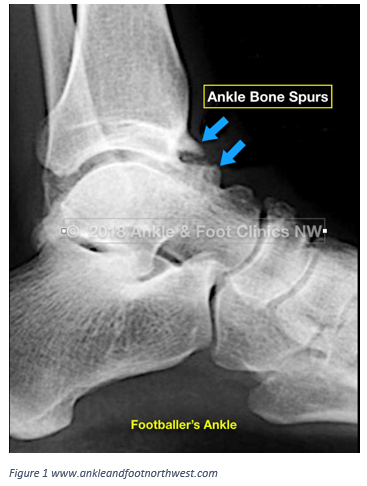 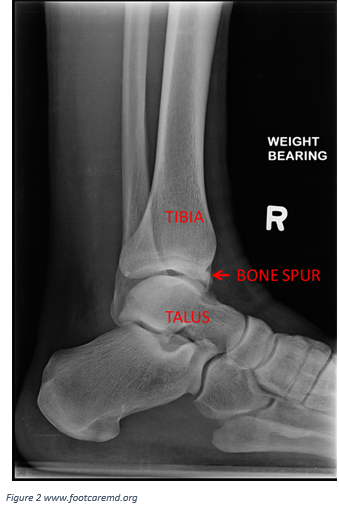 Initial treatment, as you would expect, is NSAIDs and rest. Physical therapy and orthotics can help. But when bone spurs cause impingement, compressing bone or soft tissue between the bony surfaces of the ankle, the result is inflammation, pain, swelling and decreased range of motion. Not great for an NFL player.

Impingement in the anterior (front) of the ankle was named “Footballer’s Ankle” by an orthopaedic surgeon back in 1950, but he was British and actually referring to soccer players. The name has stuck, though, and certainly applies to NFL players as well, given the stress that is put on their feet. One of the more common aggravating movements is dorsiflexion, a move that a lineman would definitely be doing frequently: 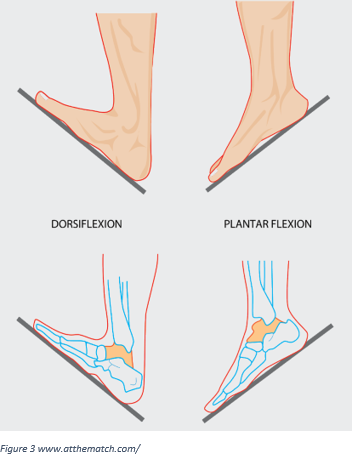 So when non-operative management fails, it’s time for the OR. The surgery is usually performed arthroscopically, with a few tiny incisions and a skinny telescope to see inside the ankle joint. The bone spurs and any inflamed tissue is removed. Here’s an example of an arthroscopic view of a bone spur:

Return to play can happen as soon as seven weeks, but recovery can take a lot longer depending on how much of a cleanout is needed. Steelers team physician, Dr. James Bradley, published a series of 29 patients undergoing anterior ankle arthroscopy and cleanout in the American Journal of Orthopedics in 2018.  He found:

Although the recurrence rate for bone spurs is high, they usually don’t cause symptoms when they return, so DeCastro got unlucky here.

The other challenge for DeCastro is how much arthritis he has in the ankle. Not only can this cause chronic pain but it can also limit his range of motion and therefore his ability to move on the field, which could also have contributed to his struggles last season.

I’ve always been a huge fan of David DeCastro, from the day his slid down the board in the 2012 draft to land in Pittsburgh. While he may be able to return to football, it probably won’t be this year unless a team picks him up later in the season to replace an injured player. And he sounds like he is comfortable with playing or retiring, however it turns out, although he did mention that his wife predicts he’ll be back. Either way, I wish him all the best and appreciate everything he gave in his time in black and gold.