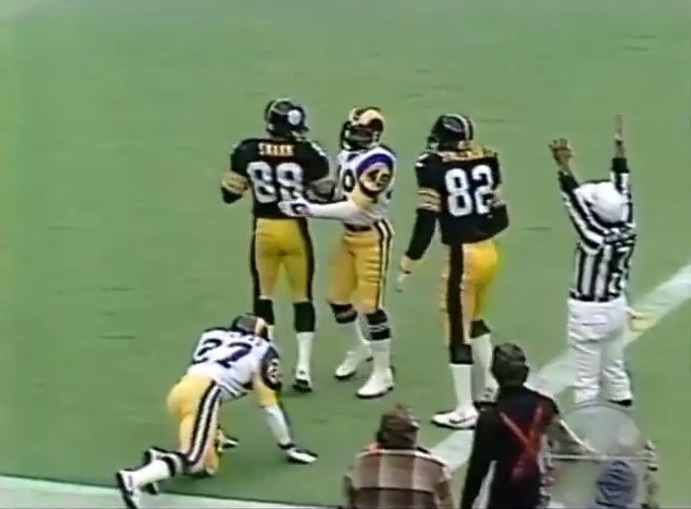 Lynn Swann was a star. And like stars, he burned brightly. But only for a little while. Drafted in 1974, part of that historic class, his final NFL season came in 1982 when he was just 30 years old. But he didn’t find the end zone that season. His last score came in 1981, just two years after the team won its fourth Super Bowl, a 24-0 win over the team they beat in ’79, the Los Angeles Rams.

It was his only catch of the day, a nine-yard grab from Terry Bradshaw in the second quarter to put the Steelers ahead 14-0. From a reduced split, Swann ran an out route. Bradshaw threw it a little behind, and the cornerback didn’t have much of a chance. Touchdown, Steelers.

It was the fifth and final touchdown of the season and the last one of his career, his 51st and final receiving score.

In 1982, he had a slow start to the season, catching two passes his first two weeks, before the players’ strike halted the season until Week 11. His production was limited until the final week of the regular season, going off with five catches for 114 yards to beat the Browns. He caught one pass for 14 yards in the team’s playoff loss to the Chargers.

Swann was inducted into the Hall of Fame in 2001, a long wait for him and Stallworth. That early retirement probably didn’t do him favors. Consider this. Of wide receivers in the Hall of Fame, Swann has the second-fewest touchdowns. Only Drew Pearson, recently inducted with his 48, has fewer. Receivers with more touchdowns than Swann? Chris Burford, Amani Toomer, Ed McCaffrey and even Roy Jefferson, one of the Steelers’ great receivers before Swann and Stallworth.