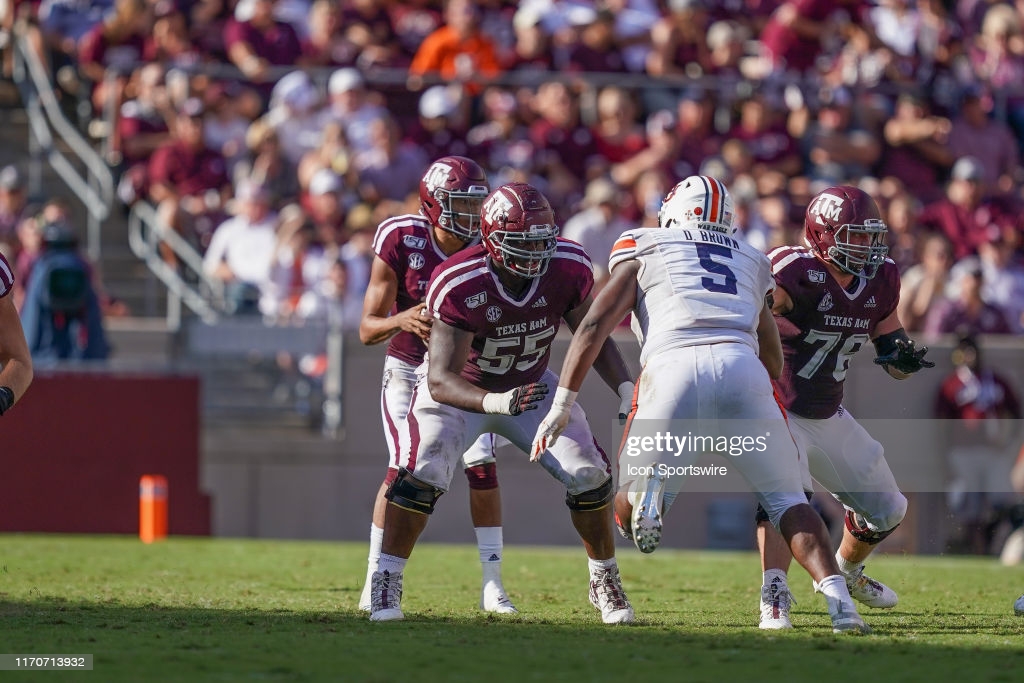 New summer series for Steelers Depot highlighting a handful of 2022 NFL Draft hopefuls and options for the Pittsburgh Steelers we could be talking a lot more about nine months from now.

-Has impressive straight-line speed and explosiveness for the position
-Thick, dense build with good weight distribution throughout his frame
-Plays with good bend and flexibility in his stance
-Maintains low pad level on contact, playing with great anchor and leverage
-Can be difficult to move off of his spot when anchoring in against power rushers
-Explosive out of his stance in the run game
-Has a strong first punch with good hand placement inside the opponent’s torso
-More than capable of climbing to the second level of the defense in the run game
-Can get out in front as an effective puller from the guard spot and also on screen plays
-Has nasty intentions as a run blocker, looking to put his competition into the ground
-Has the footwork to mirror defenders side-to-side in pass protection
-Didn’t allow a sack his sophomore season on 327 pass blocking snaps
-Able to recognize counter moves on the pass rush and recover
-Does a good job picking up stunts and twists with the C/OT, passing one defender off to pick up another
-Always looking for work when not engaged, looking to aid his teammates in pass protection
-Has starting experience at LG and RG
-Has experience playing OT in high school and may be making to move outside this fall

-Occasionally gets too aggressive on his blocks and lunges forward, resulting in whiffed attempts
-Quick change of direction skills can be compromised when asked to work farther downfield
-Blocking angles can improve to create better seals in the run game and in pass protection

-Junior Prospect from Humble, TX
-Started his high school career playing defensive line, but transitioned to OT
-Five-star prospect, the third-best offensive tackle in the country, and the No. 1 player in Texas in 2019 recruiting class
-Was an Under Armor All-American & Army All-American in high school
-Father, Henry, was a guard at Grambling State
-Started all 13 games as a true freshman in 2019
-Earned the Offensive Top Newcomer Award for Texas A&M after his freshman season
-Started all ten games at left guard, logging 691 offensive snaps in 2020 as a sophomore
-Part of an OL unit that was a finalist for the Joe Moore Award
-2019 SEC All-Freshman Team, 2020 All-SEC Second Team, 2020 AP All-America Second Team

Kenyon Green from Texas A&M was a highly-touted recruit coming out of high school and elected to say at home in the state of Texas to play for the Aggies. Green made an impact upfront for Texas A&M from the get-go, starting 13 games and was recognized by his coaches and teammates as the best offensive freshman of the year. He followed up a successful 2019 campaign with an even more impactful 2020 season, starting ten games at LG and paving the way for a potent Aggies’ rushing attack. When watching Green on tape, it’s easy to understand why he is such an effective blocker in the run game. The guy is stout and dense, standing 6’4, 325lb and boasts a well-built frame. He generates great power at the point of attack and will regularly but defenders on their backs like we see in this clip against Alabama where Green pulls from the LG spot to pick up the DE, adjusting his hands inside and driving his feet on contact to bury the defender into the ground.

For being a large human being, Green is surprisingly nimble on his feet for a man his size. He is quick out of his stance and has great footwork, operating well when asked to pull. Here in the same game, we see Green pull to the right again, picking up the same DE crashing down and gets his shoulders turned to create a natural seal for #28 Isaiah Spiller to run off his back on the counter.

Green also does a great job working up to the second level of the defense, showing an awareness to chip/combo off to the backer with the tackle as he climbs to pick up the defender to help create an explosive run. Here we see Green combo with #65 Dan Moore Jr. from the 4-I technique to the linebacker, getting a good push on #94 D.J. Dale as he moves up to the second level of the defense. Now Green does get a little extended forward trying to pick up the backer who tries to counter outside, but Green manages to maintain his grip and kick him out of the play.

While Green is known for being an impactful run blocker, he also is a great pass protector. He didn’t surrender a sack in the 2020 season and has the footwork and hand usage to handle nearly any rusher from the inside. Here we see Green’s ability to stay in-phase with the pass rusher against South Carolina. Green plays with a wide base, a strong punch inside, and smooth footwork working laterally. He recognizes the cross chop move and is able to adjust his pass protection, neutralizing the rusher entirely.

Another example against the Gators where Green adjusts his pass protection when the defender tries to get the rip underneath on his outside shoulder, playing with great arm extension on his punch and has the arm strength to stay on the defender attempting to disengage. He mirrors up the field and stays on him the entire rep.

He plays with good hip bend in his stance, sitting low to the ground and can shuffle quickly side-to-side in pass protection. Here is another rep against Florida where Green shows active hands out of his stance and picks up the defender rushing inside, neutralizing his rush completely with a strong anchor.

Green also does a great job recognizing twists and stunts upfront, picking up his correct assignment while providing enough support to his fellow blockers. Watch this play against LSU where Green aids the center with a side shot on the 1-tech then quickly adjusts to the left to pick up the looping defender to the gap, keeping him from getting penetration on the play.

Another example vs the Crimson Tide where Green effectively pass off his man to the center and picks up the defender coming around the back, pushing up out of the play.

Now this play shows off Green’s awareness and physicality, picking up the defensive lineman stunting to his gap on the attempted twist with the DE. He stays with the defender when being contacted by Dan Moore Jr. and his man, using the defender’s momentum against him and throwing him to the turf, finishing on top of him for the nasty pancake block. Now Green had his initial hand placement get outside the defender’s shoulders on the attempted twist, but he quickly got his hands inside to avoid grabbing cloth and picking up a penalty.

While reports have surfaced that the team is looking to kick Green out to OT for this season at College Station, I do think his calling card in the league will be as a high-caliber guard. If he plays well on the outside, he could stand to boost his stock showing great positional versatility.

I actually had La’el Collins from the Dallas Cowboys come to mind as a potential pro comparison due to his physicality and movement skills in the run game, athleticism and awareness in pass protection, and the fact that Collins also has that similar versatility, initially playing LT at LSU before starting out at guard in Dallas before taking over the RT spot after Doug Free retired. Green may be stockier than Collins, but he is a fluid athlete with excellent movement skills for his size, and I am intrigued to see how he holds up at tackle should they choose to move him there for 2021. He played at the blindside as a high school recruit and should be more than able to hold his own.

Overall, Kenyon Green is an athletic, physical blocker in the run game that can impose his will on defenders yet has the technical skills and mental capability to do well in pass protection. He can work on watching his forward lean and hand placement at times, but he is about as solid as they come from the interior spot.

Pittsburgh recently moved on from David DeCastro which creates a major hole at guard should Trai Tuner prove to not be their long-term answer. Being able to play out in space as well as in the power running game, Green would be a great long-term solution on the interior already boasting the likes of Kendrick Green and Kevin Dotson, forming a potentially young, nasty interior OL group for years to come.

Should he show he is a capable option on the outside at tackle in 2021, Pittsburgh should consider selecting Green early as a player that can provide stable play at tackle while having All-Pro potential if left inside.