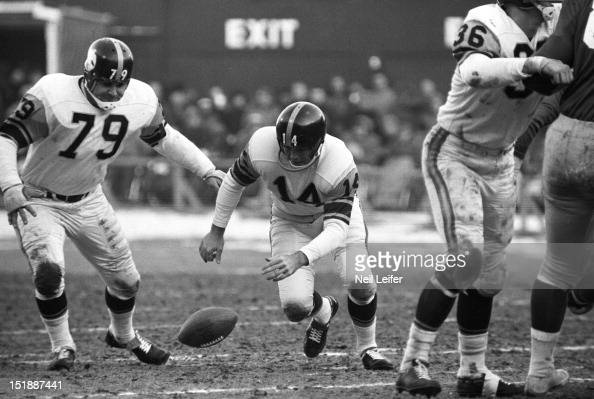 The people over at Football Outsiders have put together a pretty cool project this offseason. Over the years, the best dynasty’s have been debated. The 60s Packers, 70s Steelers, 80s 49ers, 90s Cowboys, and 2000s Patriots. Some of the greatest runs football has ever seen.

But what about the opposite? Who wins the award for the most miserable stretches of football? Football Outsiders is compiling the league’s anti-dynastys, top 58 worst of the worst. The top ten will be revealed tomorrow but already one Steelers’ era has made the list.

Here’s the team’s year-by-year record over those forgettable eight years.

It’s a bit of the post-Stautner to Noll-rebuild era. Stautner, one of the best players in team history, retired after the ’63 season, though make no mistake, the team overall wasn’t exactly All-star caliber with him either. Here’s part of what FO says about this era of losing.

“the 1965 Steelers went 2-12 with an estimated DVOA of -50.0%. They had a -30 turnover margin, which remains the worst in NFL history despite playing in a 14-game season. Bill Nelsen threw 17 interceptions, second-most in the league, but he really couldn’t be replaced. Backup Tommy Wade had 13 interceptions on just 66 pass attempts, and third-stringer Ed Brown had five more on just 18 attempts; both players hold the post-1950 record for interception percentage with at least their number of attempts.”

Wade once threw seven interceptions off the bench against the Philadelphia Eagles yet still finished runner-up in our “All-Undrafted team” series we just concluded.

After that awful ’65 season, the team canned head coach Mike Nixon to hire Packers’ assistant Bill Austin. The hope and goal was he’d be the next Vince Lombardi and Nixon tried to act like it with his speeches and overall personality. But it was all an act the players saw through and the results generally weren’t better. The team again bottomed out in 1968. They won just two games that year, Weeks 7 and 8, and lost or tied the rest. QB Dick Shiner threw nearly as many interceptions (17) as he did touchdowns (18).

Austin was canned in favor of Noll who rebuilt 95% of the roster only keeping a handful of players like Andy Russell, Rocky Bleier, and Ray Mansfield. Noll won his first game in 1969 before losing the rest. It took a couple more years but the team finally trended in the right direction and in 1972, put together its first winning season since 1963. That year, of course, included the Immaculate Reception, the unofficial start of the Steelers turning into a powerhouse dynasty. The fun kind of dynasty.

Given how dreadful Pittsburgh was their first 40 years until Noll showed up, they made the playoffs just once over that span, odds are good they appear in the top ten list that will be revealed Tuesday. It’s most likely the Steelers’ inaugural days will be included. Perhaps their 1933-1941 stretch will make the cut, where the team never posted a winning record and 25-71-6, a .275 winning percentage, even worse than their 64-71 stretch. Of course, until 1940, they were called the Pittsburgh Pirates so we can put our heads in the sand and pretend those days never existed.