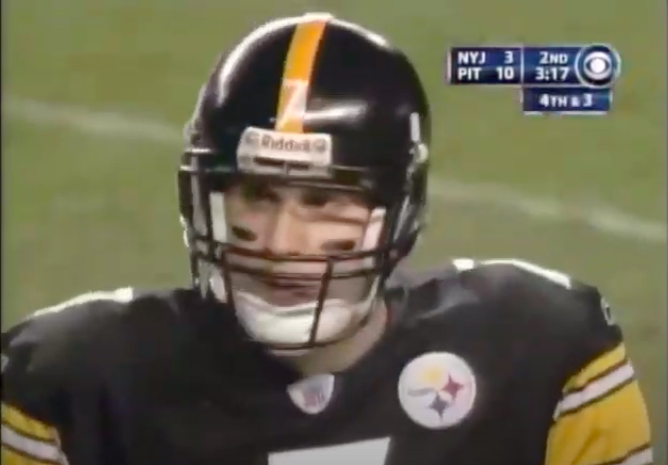 With future first-ballot Hall of Famer Ben Roethlisberger just months away from entering his 18th season in the NFL with the Pittsburgh Steelers, I thought it would be a good time to relive some important parts of his career in the black and gold.

Today, I flash back to his first career playoff win, which was his 14th and final win in a row during a magical 2004 rookie season. Of course, I’m talking about a heart-stopping 20-17 overtime win over the New York Jets on January 15, 2005 at Heinz Field that likely sent a number of Steelers fans to the doctor’s the following Monday due to heart palpitations.

Looking back on that game, Roethlisberger wasn’t asked to do much, matching what he did throughout the regular season that saw the Steelers finish 15-1 and land the No. 1 seed in the AFC under head coach Bill Cowher.

Drawing a matchup against the Jets — who the Steelers beat 17-6 in Week 14 at Heinz Field — many expected the Steelers to roll in the divisional round matchup. Instead, the Steelers turned the ball over three times, allowed a punt return for a touchdown and had to survive two missed kicks by Jets’ kicker Doug Brien late in the fourth quarter to survive.

As for Roethlisberger, it was quite fun to turn back the clock and see an athletic, young Roethlisberger once again, though it was an ugly performance throughout the game from the rookie sensation.

In the overtime win, Roethlisberger finished 17-for-30 for 181 yards, one touchdown and two crucial interceptions, adding another 30 rushing yards one four carries.

Things started out slowly in the divisional round matchup for both teams as the two traded punts back early on before the Steelers found their footing offensively, driving for a 45-yard field goal from Jeff Reed with 5:23 left in the first quarter, giving the Steelers a 3-0 lead.

Three plays later on the Jets’ next possession, Troy Polamalu picked off Jets QB Chad Pennington near midfield, setting the Steelers up in great field position, leading to a three-yard rushing touchdown from Jerome Bettis with 2:01 left in the first quarter, pushing Pittsburgh’s lead to 10-0.

That’s when the Jets stormed back, getting a 42-yard field goal from Brien with 10:34 left in the second quarter before Santana Moss returned a late first-half punt from Chris Gardocki 75 yards, tying the game at 10-10 at the half, stunning those in attendance on a 28-degree night at Heinz Field.

Coming out of the half, the two teams were slow out of the gate, struggling to get going offensively. The Steelers found a groove though and started marching down the field late in the quarter before Roethlisberger made a catastrophic mistake, trying to force a throw on the run to Antwaan Randle El. Jets defender Reggie Tongue stepped in front of the throw and returned the interception 86 yards for the score, pushing the Jets in front 17-10 with 4:09 left in the third quarter.

Things seemed dark then with the Steelers’ offense unable to consistently get anything going. Early in the fourth quarter though, the Steelers mounted a drive, marching 65 yards in 12 plays — highlighted by a vintage 20-yard scramble by Roethlisberger.

That drive was capped off by a 4-yard shovel pass from Roethlisberger to Ward on a great call from offensive coordinator Ken Whisenhunt, knotting the game at 17-17 with 6:04 left.

We’ve certainly seen that same shovel pass throughout the years, haven’t we?

New York rebounded quickly and found itself in scoring position with just over two minutes left in the game, but a 47-yard field goal attempt from Brien bounced off the crossbar, giving the Steelers another chance.

That’s when Roethlisberger made another near-catastrophic mistake.

Roethlisberger fired high looking for Plaxico Burress near midfield, leading to an interception by David Barrett, giving the Jets life once again. Fortunately for the Steelers, the Jets sat on the ball despite being in scoring position and a little over a minute and a half remaining, leading to yet another missed kick from Brien, forcing overtime.

In overtime, the Steelers’ offense found its footing again as Roethlisberger connected with Ward on passes of nine yards, 17 yards, and six yards, while running back Duce Staley added a nine-yard carry, eventually leading to Reed’s game-winning 33-yard field goal, sending the Steelers to the AFC Championship Game against the New England Patriots.

We all know what happened next week, but the divisional round win marked a milestone for Roethlisberger in his eventual Hall of Fame career, giving him his first of many playoff wins in the black and gold.