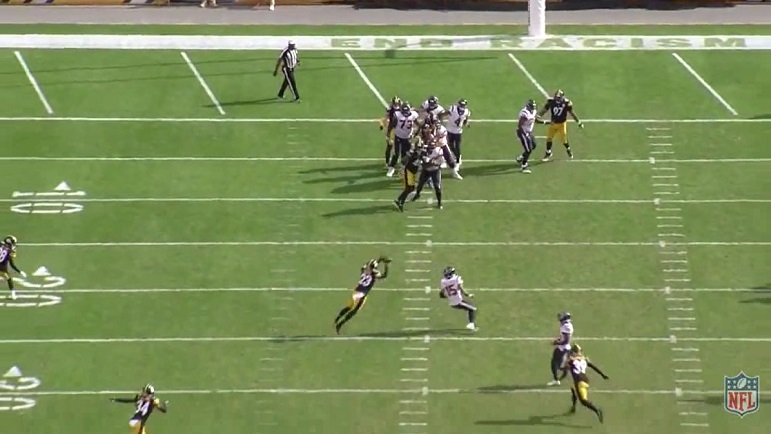 Last week, Pittsburgh Steelers cornerback Joe Haden talked about how he’s looking forward to the team’s secondary getting more turnovers in 2021 than the group had in 2020. As part of that statement, Haden talked about how he and a few other members of the secondary dropped a few potential interceptions throughout the season, and how they must correct that in 2021. On the heels of Haden talking about the interception drops the Steeler defense had in 2020, I thought it would be fun to look at them all and see how each might have impacted that particular contest, if at all.

The first dropped interception the Steelers defense had in 2021 came in Week 3 and against the Houston Texans.

Description: This looks to be a two-man read coverage by the Steelers defense and gives the cornerbacks an opportunity to trap and drive out routes. Just a four-man rush up front with a stunt. Texans quarterback Deshaun Watson attempts to hit wide receiver Brandin Cooks on a crosser underneath, but the pass is way off-target and behind. It’s so off-target that it likely surprises Haden, and the football bounces off his helmet before as he is a bit late reacting to possibly intercepting.

Had The Interception Happened: Had Haden picked off Watson’s errant throw, he would have done so at the Texans’ 24-yard-line. Whether or not he could have returned the interception for a touchdown is unknown, but at the very least, the Steelers offense would have already been set up in field goal territory with a chance to put the game away.

Outcome: The dropped interception by Haden set up a 3rd and 21 for the Texans. That turned into a 3rd and 26 after a false start. While Watson was able to connect on a deep pass for 16 yards to wide receiver Kenny Stills on 3rd and 26, it set up a long 4th and 10 and the Texans decided to punt the football back to the Steelers with 4:52 left in the contest. The Steelers offense wound up running out the clock after the Texans punted the football away.