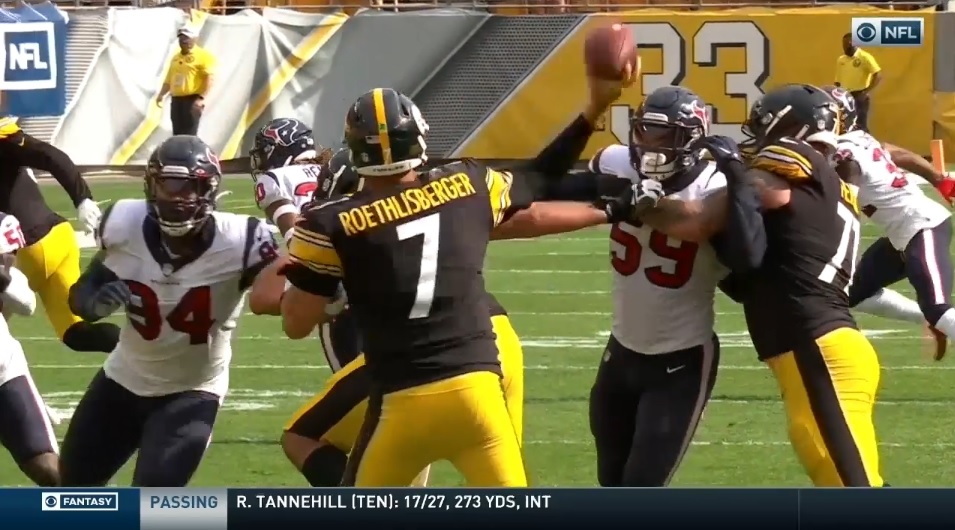 While Pittsburgh Steelers quarterback Ben Roethlisberger certainly didn’t rank well in a lot of statistical categories related to his position in 2020, he did so when it came to his ability to deliver while under pressure, according to rankings released on Wednesday by Around The NFL writer Nick Shook.

According to Shook and via Next Gen Stats, Roethlisberger ranked fifth in the NFL in 2020 when it comes to passer rating while under pressure. Roethlisberger, according to the data, registered a passer rating of 88.8 while under pressure in 2020 and had a completion percentage of 57.7%. His CPOE (completion percentage over expected) was +4.9% last season.

Big Ben’s inclusion here might be a bit of a surprise to anyone who watched the Steelers’ decline in the second half of last season, but if we’ve known one fact about Roethlisberger for the majority of his career, it’s that he’s mostly unfazed by pressure. Roethlisberger got the ball out quicker than anyone in the league in 2020 with an average time to throw of 2.30 seconds. He also posted a total expected points added (a metric that gauges how an individual’s performance affects the team’s scoring output) of -1.9, the highest in the league when under pressure. That essentially means Roethlisberger was minimizing risk/damage while also helping his team advance amid disadvantageous circumstances (for comparison’s sake, Carson Wentz posted a -122.3 total EPA when under pressure). Roethlisberger attempted 111 passes under pressure, the fifth-highest total of those on this list, yet he still threw only one interception. Finally, Roethlisberger is known as a tower of a quarterback who is highly difficult to bring down, and that shined through in the stats. He took just 13 sacks under pressure, tied for the fewest in the league. Roethlisberger didn’t look great down the stretch, sure, but when his team’s average offensive line (ranked 17th by PFF) didn’t do its part, he still overcame adversity at a rate that was among the best in the league.

One of the biggest takeaways from Shook’s recap of Roethlisberger’s pressure handling in 2020 is the fact that quarterback attempted the fifth-highest total of attempts of those on this year’s list. Roethlisberger obviously can’t be asked to continually handle so much pressure in the passing game at that rate as we head into the 2021 season.

The Steelers obviously hope that new offensive coordinator Matt Canada, along with the addition of running back Najee Harris via the draft and a few new faces on the offensive line, will be enough to help prevent Roethlisberger from needing to drop back and pass as much as he did in 2020.