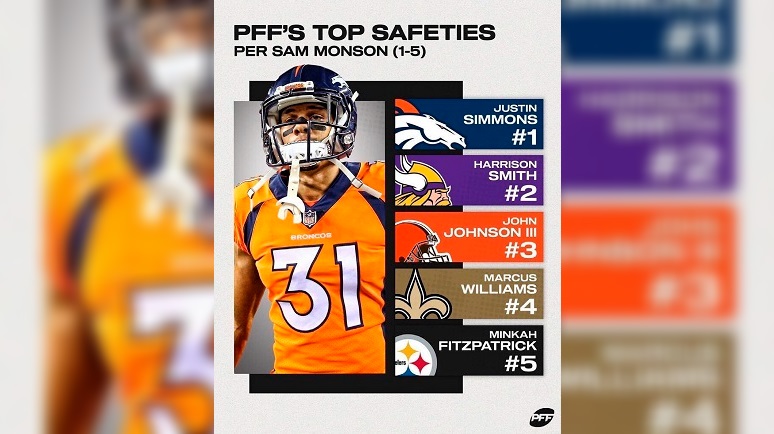 In just three NFL seasons, Pittsburgh Steelers safety Minkah Fitzpatrick has already garnered two First-Team All Pro Awards and has been voted to the Pro Bowl twice. Even so, at least one top analysts from Pro Football Focus believes Fitzpatrick is the fifth-best safety in the NFL entering 2021.

Sam Monson of PFF released his 2021 safety rankings on Tuesday and he has Fitzpatrick ranked fifth behind the likes of Justin Simmons, Harrison Smith, John Johnson III and Marcus Williams. Below is his reason for ranking Fitzpatrick fifth overall.

Since moving to Pittsburgh and being allowed to play his natural position, Fitzpatrick has blossomed into one of the best safeties in the NFL. Some of that play is built off the back of a couple of exceptional games, but he now has nine picks and 11 pass breakups over the last two seasons, including the playoffs.

It sure feels like Fitzpatrick being ranked fifth overall is quite a diss. While I can see him maybe being ranked behind Simmons at this point, there’s no way I would put him behind the likes of Smith, Johnson and Williams. Rankings such as these are obviously subjective.

For his career, that includes him splaying his entire rookie season with the Miami Dolphins, Fitzpatrick has registered 11 total interceptions of which three he returned for touchdowns He also has registered three forced fumbles to go along with 29 total pass breakups. Fitzpatrick’s four career defensive touchdowns currently has him tied for third overall in that stat dating all the way back to 2017.