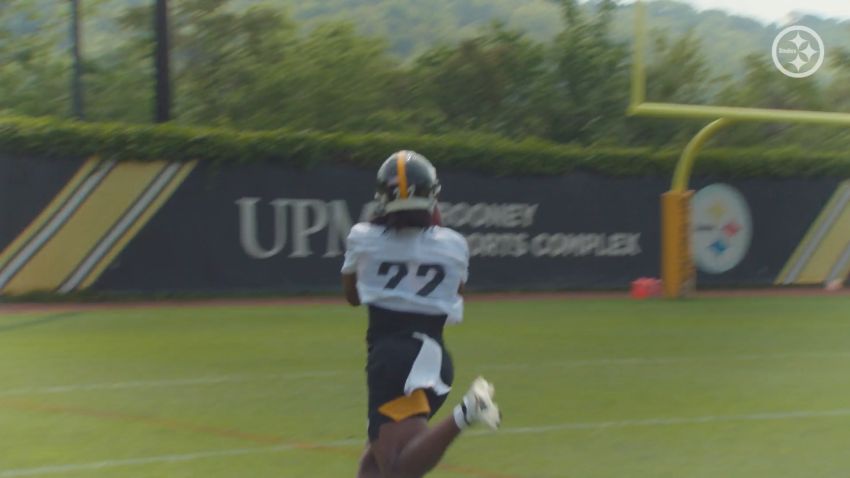 After ranking the Pittsburgh Steelers’ receivers 18th overall, Pro Football Focus listed out the top running back rooms in football, 1-32. Despite spending a first round pick on RB Najee Harris, taken 24th overall, the Steelers were still ranked 24th overall in the league.

Here’s what author Ben Linsey had to say about the room.

“The Steelers’ backfield will ride on the success of first-round selection Najee Harris. Before his arrival, it was shaping up to be in the competition for the worst running back group in the NFL, with Benny Snell Jr. as the lead back (57.0 overall grade in 2020) and players such as Anthony McFarland Jr. and Kalen Ballage rounding out the group.

Harris’ well-rounded game clearly gives them a better option for the upcoming season. He has unique elusiveness in the open field for someone his size and is a natural receiver out of the backfield. There’s a reason he earned three consecutive PFF grades of 88.0 or higher at Alabama from 2018 to 2020.

It’s just difficult to put the unit as a whole very high, with limited quality depth behind a rookie lead back.”

It’s fair to be skeptical about the Steelers’ room, especially its depth and hey, Harris has yet to take a NFL snap. Pittsburgh will have to count on Harris being the player they drafted him to be. And he needs to stay healthy: if he misses time, the Steelers’ run game will suffer.

Still, there’s reason for some optimism in this room. Anthony McFarland had a quiet rookie year but new OC Matt Canada coached him at Maryland. McFarland was also an underclassman when he declared, creating a steeper learning curve in a tough pandemic year. He should take a step forward his sophomore season.

At worst, Snell has carved out a solid niche role as a special teamer, embracing running down kicks and punts after not having to do that prior to reaching the NFL. His roster spot is not secure but he’s the current favorite as the team’s #3.

Pittsburgh did sign Kalen Ballage in the offseason. He could find a home as a special reamer and short-yardage back, posting one of the league’s best conversion rates since entering the league. But he’s also posted some dreadful numbers and hasn’t shown much big-play ability.

One name not mentioned is Jaylen Samuels. He’s struggled to carve out a role as a third down and receiving back. But his skillset is a little different than Snell or McFarland which at least gives him a chance to make the roster by offering a different kind of value.

With how much this group has struggled and how unproven it remains, it’s hard to argue with their current 24th slot. If Harris has a strong rookie season, they’ll rocket up the charts this time next season.

The top running back room in the league was awarded to the Cleveland Browns with its two-headed combination of Nick Chubb and Kareem Hunt.

While the Steelers had the worst ranking of any team in the AFC North, they weren’t the worst in football. That “award” went to the New York Jets. The Miami Dolphins were ranked 31st.