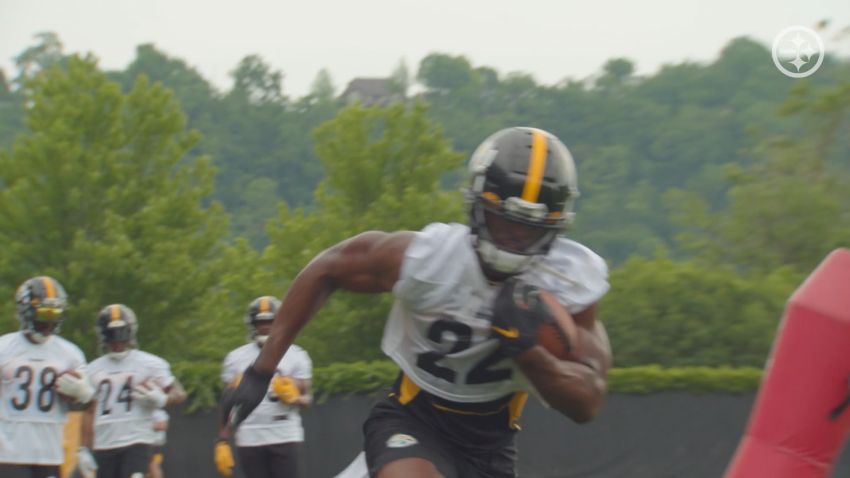 Expectations are high on the field in 2021 for Pittsburgh Steelers rookie running back Najee Harris. For those that dabble in the world of fantasy football each year, Harris is a guy that is generating a ton of buzz.

According to Pro Football Focus fantasy writer Ian Hartitz, Harris has potential top-five volume in 2021 with the Steelers, and certainly looks the part of a bonafide top 10 overall fantasy running back with his projected role in Pittsburgh.

With Hartitz projecting that, that means that Harris could have a great season in 2021 with Pittsburgh, touching the football around 300 times as PFF projects, which would put him right around 240 fantasy points in PPR (point per reception) leagues, good for No. 17 overall in fantasy football and RB11 in that format.

While some may read that and think that’s a bit of a high projection due to a rebuilt offensive line and the overall talent the Steelers have in the passing game with names like JuJu Smith-Schuster, Diontae Johnson, Chase Claypool and Eric Ebron, historically first-round running backs see a ton of volume right away, which Hartitz points out is due to the heavy investment made by teams at position that traditionally doesn’t have a long shelf life.

“The running back position has been kinder to rookies than most in recent history, Hartitz writes. “Overall, running back has nearly twice as many top-24 rookie performers (30) than wide receiver (16) over the past decade. We know the shelf life for the position is shorter than most, so it makes sense that teams look to get the most out of their investments from jump street.”

Harris doesn’t have much competition — if any — in the backfield that he could lose touches to in volume. While Benny Snell Jr. is a solid backup to have in the roster, you’re not actively planning to take a guy like Harris out of the game to give Snell touches, too. The same goes for Anthony McFarland, though there is that familiarity with new offensive coordinator Matt Canada dating back to his time at Maryland.

Add in the fact that the Steelers under head coach Mike Tomlin are traditionally a bell cow-type role in the backfield and it’s clear that Harris could be in for great rookie season, both on the field in real football and on the screen in fantasy football worlds.

“The first thing to note about the Steelers is that they’ve historically leaned on a single running back,” Hartitz writes. Le’Veon Bell (25.6 touches per start), DeAngelo Williams (22.8), James Conner (20.8), Jaylen Samuels (18) and, hell, even Stevan Ridley(17) were absolutely fed the ball from 2014-2018. Ben Roethlisberger threw his RBs at least 100 targets during the latter three years of that stretch — there haven’t been many more fantasy-friendly roles than working as the Steelers undisputed RB1 over the years. Even if Big Ben is as washed as some would like to think; that would seemingly only increase Harris’ potential touch ceiling considering the likelihood of more rush attempts and check-downs.”

Many can point to a rebuilt offensive line that looks poor on paper as a reason to avoid a guy like Harris early in fantasy football draft. The 2020 season showed that offensive line play really shouldn’t be a factor; only volume and overall talent of the back should play a role, as Hartitz points out.

That’s a startling number, and one that should be noted when it comes time for fantasy drafts later this summer.

With Harris, the volume will undoubtedly be there. He’s playing with a Hall of Fame quarterback and has weapons all over the place that should take away teams’ ability to stack the box against a below average offensive line (on paper). Knowing that, Harris’ value should be rather high come fantasy football season, which should be good news for Steelers fans on and off the field.