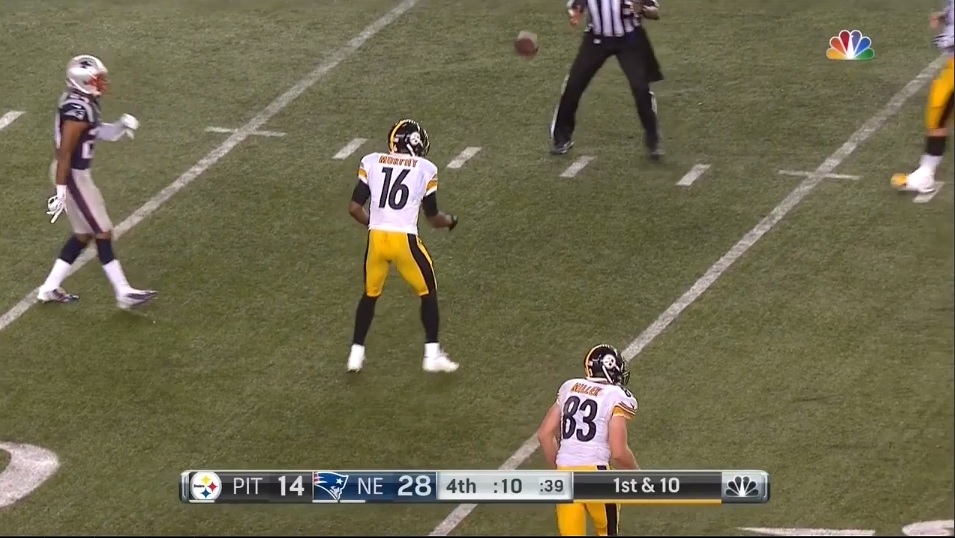 Bringing back a series we did a few years ago to get us through these next couple of weeks. At the time, we wrote about Dallas Baker’s lone career catch recently got me to thinking about others in that “solo” club. Players who did one thing only one time in their entire career. One rush, one pass, one interception, one touchdown, you get the idea. Truly, a blip on the radar but Steelers nonetheless and literally, a “one” hit wonder.

Like Tim Tebow of today, quarterbacks switching positions isn’t a new thing. But in the majority of cases, they don’t work. The guy never makes the team, never contributes a snap, it’s a shot-in-the-dark that usually goes nowhere.

Murphy was a college quarterback at Boston College. He began his college days at Florida but transferred up north for the 2014 season. He led the Golden Eagles to a winning record but he was more productive as a runner than passer, rushing for over 1,100 yards and 11 scores while throwing just a couple more touchdowns (13) than interceptions (10) and completing 57% of his passes. Murphy broke Doug Flutie’s record for most rushing yards by a BC quarterback.

At 6’1″, 215, he ran a 4.60 at his Pro Day, impressing with a 38 inch vertical, 10’5″ broad, and 7.11 three cone. An obvious candidate for a position switch, he went undrafted by was picked up by the Steelers. He made the team and dressed for his first NFL game, an away game to Foxborough. The Steelers, as they often do versus Tom Brady, lost the game. Down two scores with a minute left, Pittsburgh spread the field and Murphy found himself on it. He logged seven snaps and on 4th and 9 with the game’s outcome a formality, Roethlisberger found Murphy on a scramble drill. One of the last “old-school” Roethlisberger plays, shrugging off a defender, short-stepping to buy time, and hitting Murphy who made a diving catch.

He logged a lone special teams snap the following week, didn’t see the field in Week 3, and didn’t dress in Week 4. When Le’Veon Bell came off suspension, Murphy was released. It might be a first for a rookie to so methodically go backwards to begin his career.

The Benjamin Button of a football career.

Murphy was signed to the Steelers’ practice squad the day after he was cut from the 53. He was prepared to play quarterback after Ben Roethlisberger missed a month with a knee injury. But he was never needed, the team turning to Landry Jones and then signing Mike Vick. The closest Murphy got was being signed back to the 53 for a cup of coffee in late October. He was released November 4th to make room for CB Doran Grant. Murphy was signed back to the practice squad, the place he’d call home the rest of his rookie season.

Either by choice or by virtue of having no other options, he signed a futures contract with the Miami Dolphins in 2016. He suffered a knee injury early in camp and was released with an injury settlement. The only other team we know he played professionally for was the 2019 AAF Orlando Apollos. But I don’t have any information that he actually appeared in a game for them, though news reports indicate he was there as a quarterback, not wide receiver.