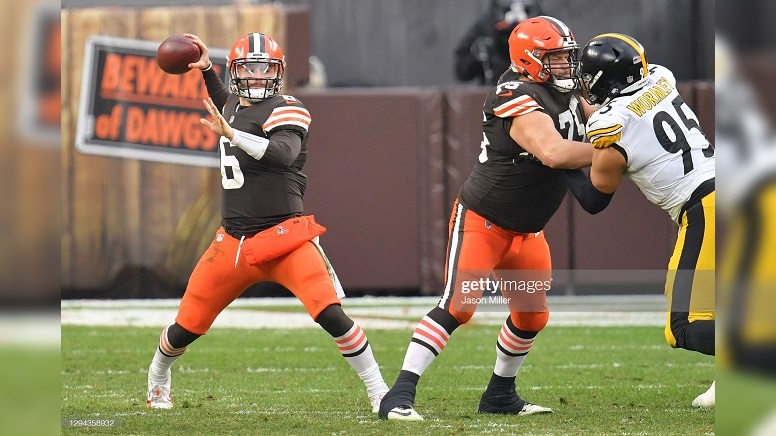 The offseason hype train for the Cleveland Browns continues to roll down the tracks at a high rate of speed.

On Thursday, NFL.com analyst Marc Ross labeled the Browns — perennial offseason winners — as the league’s most complete team, ahead of the likes of the Tampa Bay Buccaneers (who return all 22 starters from last season’s Super Bowl-winning team), the Kansas City Chiefs, Los Angeles Chargers and Buffalo Bills.

It’s no secret that the Browns had a terrific offseason and draft, in which they signed veteran secondary members John Johnson and Troy Hill, drafted Greg Newsome, and added a big name up front in Jadeveon Clowney. Add in the fact that they’re riding high off of their first playoff win in 26 years and the hype train should be rolling for the Browns.

But the most complete team in the NFL? That might be a bit of a stretch at this point.

Yes, an elite offensive line — which was the key to success last season — returns completely intact, and the Browns do get Odell Beckham Jr. back from injury, but placing this roster over the likes of the Buccaneers or Chiefs is hard to fathom.

“The Browns have been building a respectable roster for several years now. But heading into the 2021 season, they aren’t just good — they’re loaded with Pro Bowl talent from top to bottom, featuring multiple high-level players at almost every position group,” Ross writes.

It’s true, they are loaded with Pro Bowl talent and possess easily the best roster — on paper — in the AFC North. But they will not be the underdogs anymore this season and will play the entire 2021 season with a target on their backs. It’s a different world going from hunters to the hunted, and that’s the situation the Browns find themselves in.

While it is a deep roster, in terms of the starting unit, depth is a concern overall, which could play a factor down the stretch for the Browns.

Really, it all comes down to quarterback for me, and it’s hard to place the Browns over those four other teams in Ross’s list, simply based on the most important position in all of sports.