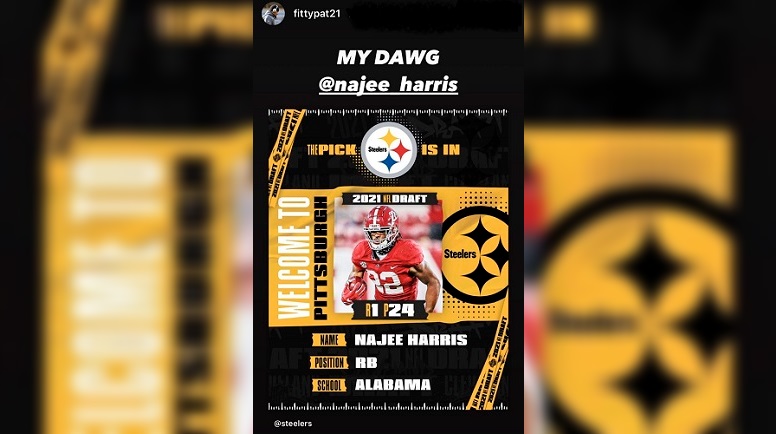 Back in March, and ahead of the 2021 NFL Draft, Pittsburgh Steelers safety Minkah Fitzpatrick put his thoughts about running back Najee Harris on Twitter and said that any team that winds up drafting the Alabama would essentially be lucky. At that time, Fitzpatrick probably had a good understanding that there was an outside chance that the Steelers would ultimately draft Harris at 24th overall in the first round and obviously that’s what ultimately happened.

I let the front office do their thing, but whoever gets @ohthatsNajee22 is gonna be lucky…dude’s a beast. https://t.co/dZenvjRsQF

“You know, he’s a great player and I expect him to be that,” Fitzpatrick said of Harris. “He’s a tough guy, an athletic guy. He’s fast out of the backfield. He was picked number one overall by the Steelers for a reason.”

Fitzpatrick obviously already knew quite a bit about Harris prior to the Steelers drafting the running back in the first round as the two are University of Alabama products. When Harris was a freshman at Alabama, Fitzpatrick was in his final year so the two were teammates for one season. Both obviously wound up being first round draft picks as Fitzpatrick was selected 11th overall by the Miami Dolphins in 2018.

The fact that the Steelers selected Harris in the first round this year was quite a monumental event because the organization hadn’t drafted an Alabama product in the first round since 1951 when they selected Clarence “Butch” Avinger, a quarterback, fullback, and punter, ninth overall that year.

Currently, the Steelers have four Alabama products under contract as defensive lineman Isaiah Buggs and center J.C. Hassenauer also are on the 90-man roster during OTAs. Both were also teammates of Harris’ in 2017 along with Fitzpatrick.

“So, he’s a Bama guy, too, so he has that high expectation from that,” Fitzpatrick said of Harris on Tuesday. “But he’s going to go out there and do what he does for sure.”