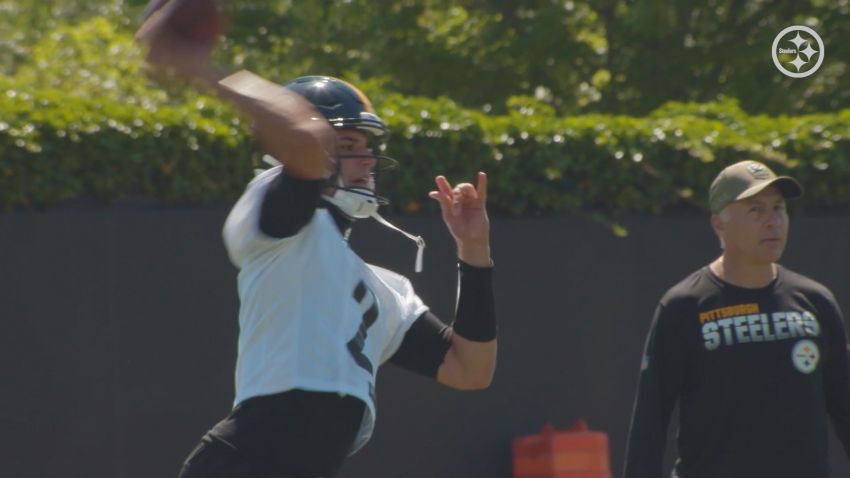 New Pittsburgh Steelers quarterbacks coach Mike Sullivan has spent almost 30 years coaching football, and almost 20 of them at the NFL level. All but one season of that time in the NFL was as an offensive mind. He’s had prior stints as a QBs coach with the Denver Broncos and New York Giants, worked as an offensive coordinator for both the Giants and Tampa Buccaneers, worked as a receivers coach for the Giants, and began his NFL career on offense as an offensive assistant for the Jacksonville Jaguars.

After a year away from the NFL level, Sullivan returned for the chance to coach the QBs for the Steelers. That role will give him the chance at something he didn’t quite get in his prior stints coaching QBs or coordinating the offense: Developing a new franchise QB. Right now, the Steelers believe they may have their next face on the roster in 2018 third-rounder Mason Rudolph. Speaking with the media at minicamp Tuesday, one of the first questions Sullivan fielded was about what he’s seen from Rudolph so far.

“Well the first thing, Mason showed up, he was in great shape. When I first met him he looked fit, he his come out and has a great knowledge of the concepts that are carrying over from the past. And then he’s embraced the newer aspects of it, whether it’s formations and the different things we’re doing schematically,” Sullivan said. “In working with him, he’s been very coachable with regard to his footwork and some of those things.”

Sullivan, hired in February, has not had a lot of time with Rudolph so far, working with him through OTAs and now minicamp. Rudolph is one of the first chances Sullivan has had to groom a quarterback from backup to “the guy”. His season in Denver was spent with veteran signing Case Keenum, his time in Tampa Bay was with an established Josh Freeman as starter, and while he was in New York when Eli Manning was growing into a starter, he coached receivers at the time, and didn’t take over QBs until Manning was well into his starting career.

Rudolph is not a rookie by any means, entering his fourth season and already making nine career starts. But he is still young with room to improve, after an eight-start audition in 2019 placed him among the worst QBs in the NFL. Pittsburgh thought enough of him to sign him to an extension through 2022 this offseason, and continue positioning him as the present front-runner to replace Ben Roethlisberger.

A Week 17 start last season saw Rudolph play far better than he did the season prior. One of the main responsibilities Sullivan was brought in to take up is getting Rudolph set to replace Roethlisberger should the team elect to go that route, rather than draft a first-round QB in 2022. Minicamp is the first big opportunity he has to work with Rudolph in close to a game setting, and begin focusing on areas to improve.

“I just think he needs to now, as we take this next step with a minicamp where we’re going to have some 11-on-11, do what all quarterbacks need to do that want to be the guy,” Sullivan said, “and that’s to have consistency, and be able to be a person that makes consistently good decisions and is consistently accurate. So we’re doing everything we can to get him ready to improve all those areas so we can take the next step and continue to develop.”