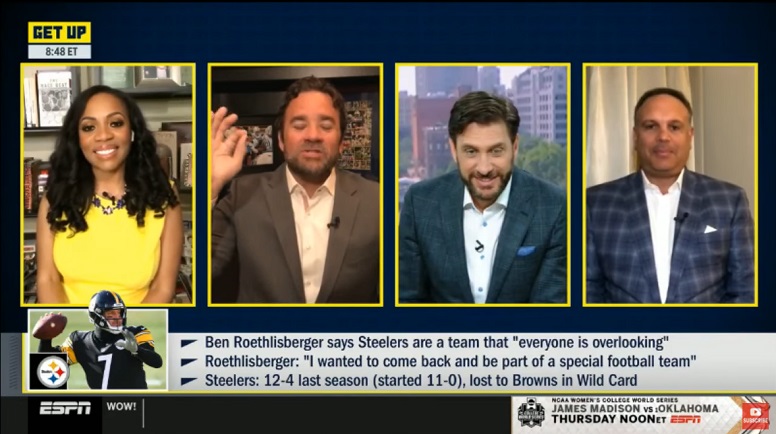 On Tuesday, Pittsburgh Steelers quarterback Ben Roethlisberger said during his session with the media that he thinks this year’s team is a special one and that many people are overlooking them when it comes to 2021. On Wednesday, that Roethlisberger soundbite was played on ESPN’s ‘Get Up!’ show and then panel members Jeff Saturday, Kimberly Martin and Mike Tannenbaum were all essentially asked if they are buying the notion that the 2021 Steelers are somehow indeed being overlooked.

“I am buying it,” Saturday said. “Listen, man, everybody’s kind of got on this train of just bashing the Steelers. Their offensive line was soft last year, they played poorly. Everybody understands that. Schematically, from an offensive perspective, you’re throwing the ball dang near 50 times a game with a guy who had an elbow reconstructive surgery the season before. And by the way, they were 11-0 at one point. Did they hit the skids towards the end of the season? Absolutely. But with this defense and Mike Tomlin as their head coach, to be dismissive of this team, I think is foolish. This team, if they get and find a structure for an offense that can be complimentary to that defense, this team can make noise. And by the way, they would still have a chance to win the division. So, don’t just cast this team of like they’re going to be trash. I do not buy into that.”

After a very measured take on the 2021 Steelers from Saturday, then it was Martin’s turn to answer the same question about Pittsburgh possibly being overlooked in 2021. She, however, kind of went off on a weird tangent and really didn’t do a great job of answering the question.

“He’s saying they’re being overlooked. We literally are looking at the Steelers, we are looking at you,” Martin said. “I was at that game where they lost to the Browns in the first round. Like, this is an 11-0 team that was viewed by the end of the season as probably the softest 11-0 team. You know, we saw them lose to the Browns; Big Ben, [Maurkice] Pouncey, crying on the bench. You know, this is what we’re all looking at. This isn’t, you know, we just woke up one day and decided to question the direction of the Steelers.

“You know, Big Ben had to take a pay cut in order to stay with the franchise. JuJu [Smith-Schuster] didn’t get the big money that he was expecting in free agency. There are a lot of questions about where this team is headed post Big Ben. He’s got this year, so them being overlooked to me seems a bit overblown. I think there are obvious questions. When you look around the AFC, everybody’s gotten better. So, the question is, how good are the Steelers going to be? That’s what we want to know.”

So, how good are the Steelers going to be in 2021? That was the question that Tannenbaum was asked to answer when it came his turn to speak on the Steelers.

“The answer is, Jeff Saturday’s completely wrong,” Tannenbaum said. “The Steelers are going to be bad this year and it’s going to get worse next year. I agree with you on Mike Tomlin. I think Mike Tomlin is a great coach. But if you go back to last year, Ben Roethlisberger was 31st in the league in yards per pass attempt. He cannot get the ball down the field. They were bad on the offensive line last year. They have a new left tackle, a new center replacing two really good players.

I wonder if Tannenbaum heard Martin say that Roethlisberger took a pay cut earlier in the offseason. I wonder if he now knows that Roethlisberger is now set to earn just $14 million in 2021. In short, Tannenbaum seems to think the Steelers will be worse in 2021 than they were in 2020 because the other three AFC North quarterback will be better this upcoming season. I’m not sure what the Steelers succession plan at quarterback has to do with 2021 and the same goes for Roethlisberger’s earnings. About the only thing useful that Tannenbaum offered as part of his argument is Roethlisberger’s low yards per pass attempt stat.

Of Saturday, Martin and Tannenbaum, Saturday gave the best and most measured response. He was quick to point out that if the Steelers offense can be somewhat more complementary to the defense in 2021 that the team could “make some noise” in 2021. That’s about the long and short of it, quite honestly.