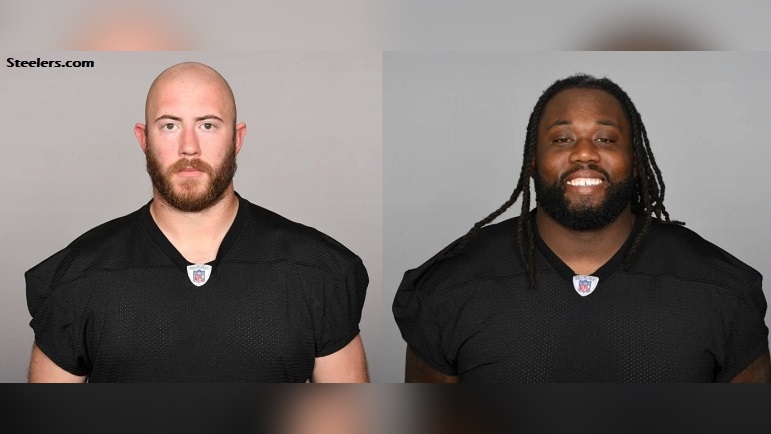 While it did happen a lot earlier in the offseason, the Pittsburgh Steelers did sign two free agent offensive lineman with NFL experience in tackle Joe Haeg and guard Rashaad Coward. Up until now, however, we haven’t heard too much about those two players and specifically, how they look since signing with the Steelers. That changed on Thursday as new Steelers offensive line coach Adrian Klemm was asked to give his thought on both Haeg and Coward at the end of the team’s 2021 mandatory minicamp.

Klemm first gave a rundown on Haeg, who is primarily a tackle but who can also kick inside to guard should the need arise.

“He’s capable of doing a number of different things,” Klemm said of Haeg on Thursday. “He’s very athletic, so I think what we do offensively is advantageous to him, you know, in terms of getting on the field and having success.”

Haeg, who played his college football at North Dakota State, was drafted originally by the Indianapolis Colts in the fifth round (155th overall) of the 2016 NFL Draft. To date, he has played in 67 regular season games with 38 starts. Last season as a member of the Tampa Bay Buccaneers, Haeg was used mostly as a jumbo tight end. He did, however, play about 50 snaps at left guard in one game, as well. As Klemm stated on Thursday, Haeg is a position flexible lineman who has seemingly played both tackle and guard spots since being drafted.

After talking just a little bit about Haeg, Klemm then proceeded to talk some about Coward, who started his NFL career with the Chicago Bears after going undrafted in 2017 out of Old Dominion.

“Rashaad is a guy who is fairly new to the offensive line position, but in terms of being physical, he’s a guy that was a defensive lineman before, so he plays with a different mentality I really like,” Klemm said of Coward. “Big-body guy who is physical, heavy-handed. He’s learning the system, too, obviously as new guy, but from the things that I’ve seen, he has a competitive spirit and he’s fully engaged and he’s excited about it. And I think he realizes there’s opportunities out there and anytime there’s opportunities and you’re a guy willing to compete, it’s a great experience. It’s great for all of us because he’s trying to get on the field and he’s doing the things that we ask of him. Can’t want any more than that. We’ll just have to see what he looks like in pads.”

As Klemm stated, Coward began his NFL career as a defensive end before being moved to the offensive line for the 2018 season. The Steelers are not strangers when it comes to converting defensive linemen to offensive linemen, however, as Alejandro Villanueva and Brian Mihalik are two recent examples of that.

According to reports this past week, Coward was getting some work with the first-team offensive line at right guard during OTAs while starting right guard David DeCastro was absent.

The Steelers have a lot more money invested in Haeg than they do Coward so it’s not hard to imagine the former making the 53-man roster as a backup tackle and emergency guard, especially with the experience that he has playing as an eligible tight end. As for Coward, he’s far from being considered a lock to make the 53-man roster this year as the team’s mandatory minicamp comes to a close. Assuming everyone on the Steelers offensive line depth chart remains healthy all summer, and assuming the team keeps nine offensive linemen in total, Coward will likely need to win the ninth and final spot to make the 53-man roster after the preseason ends.

“We’re fortunate to have them [Haeg and Coward], especially Joe, who has a lot of position flexibility,” Klemm said on Thursday.