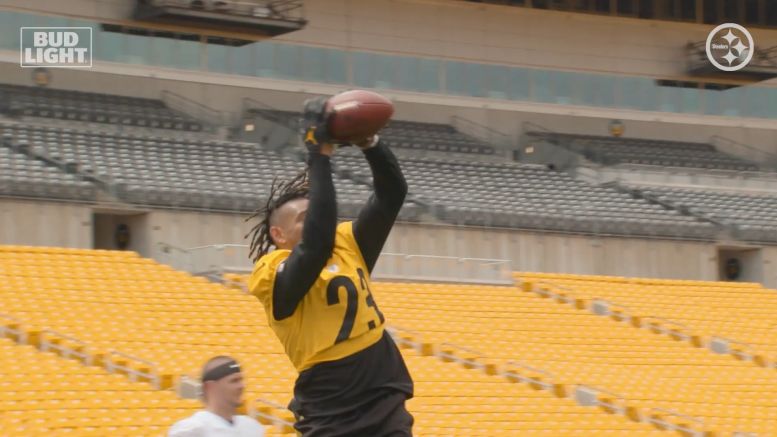 Joe Haden is a team player. He always wants what is best for the team, and right now, that means he’s highly motivated by the Pittsburgh Steelers’ need to identify who their next slot defender will be—though perhaps a small part of him is motivated by making sure he doesn’t have to play inside.

“Honestly, I don’t want no parts of the slot”, he told reporters on Wednesday when addressing the topic, with a laugh. He said that he did have to play slot a bit during his rookie season, but he considers himself an outside cornerback.

“It’s a different ball game on the inside. Those are the little slot receivers, the route trees are totally different, it’s a whole lot of different timing and stuff like that”, he said. “I’m more of the outside guy. Those dudes can hold that nickel spot down”.

As of now, it looks as though Cameron Sutton is the front-runner to be the Steelers’ primary slot defender as they look to replace Mike Hilton, who signed with the Cincinnati Bengals as an unrestricted free agent this offseason.

No doubt they would have liked to retain him, but the realities of the salary cap would have made it very difficult, not to mention the fact that the Bengals offering him a long-term deal meant Hilton likely wouldn’t have been willing to work with them on a short-term deal based on void years to reduce his salary cap hit—as Sutton did.

Hilton has a cap hit of more than $5 million for 2021, and will pocket $8 million in cash. In contrast, Sutton counts $1.7 million against the cap this year, on a two-year, $9 million deal that includes three void years. He earns exactly half, $4.5 million, in cash this year, including a $3.5 million signing bonus and a $1 million base salary. He has a base salary of $4.5 million in 2022.

Now, for obvious reasons, it was always going to be the case that, in the event that the Steelers cannot find another slot option, Sutton would play inside before Haden does. Haden is their best outside cornerback, for one thing, and for another, he just doesn’t have the experience.

According to Pro Football Focus, Haden has played exactly 55 snaps lined up in the slot since he came to the Steelers in 2017. That’s about 14 snaps per season, or fewer than one per game. Sutton has logged more than 500 snaps in the slot during the same time period.

The other major candidates are veteran free agent signing Arthur Maulet, who has done it at the NFL level, and second-year safety Antoine Brooks, who was talked up a bit by Mike Tomlin and Teryl Austin recently.

Rookies hard-pressed to take over those slot responsibilities from the get-go serve as the other candidates. Tre Norwood, Lamont Wade, Mark Gilbert, and Shakur Brown will certainly try to change their minds.