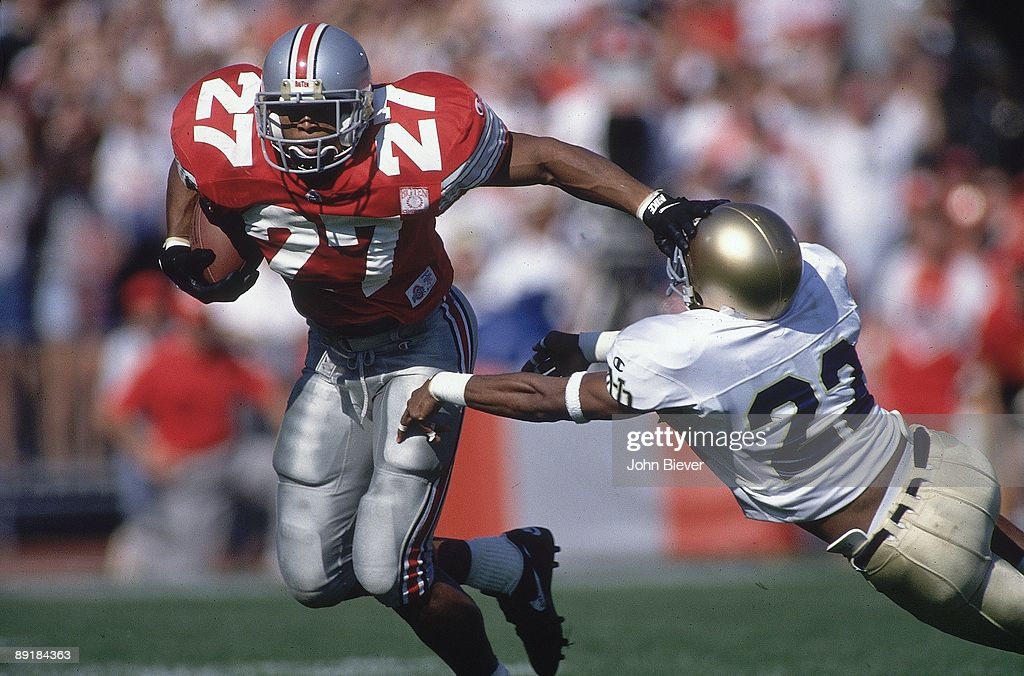 Maybe it’s not fair to put things quite in black-and-white terms, but if Jerome Bettis wasn’t going to be the next great Pittsburgh Steelers’ running back, Eddie George might have been.

In Bill Cowher’s new book Heart and Steel, released earlier this month, Cowher recalls the 1996 NFL Draft. The Steelers were looking for a serious upgrade at running back after using a by-committee approach in 1995 of Eric Pegram and Bam Morris.

Cowher writes that if they decided to upgrade through the draft, he wanted to make a move for Eddie George. Here’s an excerpt.

“If we were going to hand the job to a rookie, I wanted us to find a way to get Eddie George from Ohio State. He was tall for the position – about six-three – and he had the ruggedness of a linebacker. I liked that.”

George was one of college football’s most dominant running backs. In his final two years with the Buckeyes, he rushed for over 3,300 yards and 36 touchdowns, including a 1,927-yard, 26-touchdown 1995 campaign.

But having the 28th pick and knowing George would go higher than that, the Steelers attempted to facilitate a trade for Bettis, who fell out of favor in Los Angeles after having early success.

“We decided to make our move on draft day. Out player personnel director, Tom Donahoe, said the Rams wanted a lot more than the draft picks – a second and fourth – we offered for Bettis. We insisted on our terms and got the deal done.”

On Day 1 of the draft, Pittsburgh sent a second and fourth round pick for Bettis and a third. However, Cowher writes the Steelers weren’t completely convinced the move was going to work out.

“Admittedly, we weren’t sure on everything about him. Some rumors were floating around that he was a bit og a malcontent, a ‘locker room lawyer…’Bettis showed up with the most contagious smile and you could tell that his teammates wanted to be around him. He than ran a couple of basic running plays. I looked at our running backs coach, Dick Hoak: ‘Oh my God. Did we get a special player here or what?'”

But the trade paid off in a bigger way than the team probably even imagined. In 1996, the Steelers ranked top three in rushing yards and touchdowns and sixth in yards per carry. Bettis rushed for over 1,400 yards and 11 rushing scores as the Steelers captured the AFC Central crown. He’d go on to have a Hall of Fame career with the Steelers, winning one for the thumb in his hometown of Detroit.

George was drafted 14th overall by the then-Houston Oilers and became one of the best backs of his era, along with Bettis. Turns out, either choice would’ve been a good one for Pittsburgh though their ability to select George – who went 14 selections earlier — would’ve been difficult.

It’s always interesting to read these stories after the fact. The direction teams could’ve gone and what they were thinking in the moment. How history would’ve been different, for the Steelers, for Bettis, and George, if the team had traded another way.