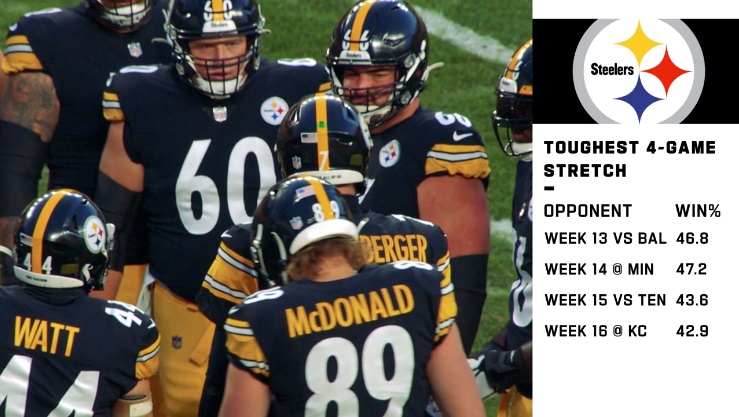 The Pittsburgh Steelers certainly appear to have one of the hardest 2021 regular season schedules on tap. I’m not breaking news with that statement. Within that, however, which four-game stretch is the toughest for them? NFL Media’s first analytics expert Cynthia Frelund believes she has the correct answer to that question in her latest video that was released on Tuesday.

Frelund believes the Steelers’ four-game stretch from Week 13 to Week 16 is their toughest in 2021.

“Pittsburgh is not favored in any of these games. according to my model, starting with the home matchup with the Baltimore Ravens,” Frelund said. “The Steelers then travel to Minnesota before returning home for a matchup with Julio Jones and the Tennessee Titans. Their Week 16 game with Patrick Mahomes and the Kansas City Chiefs is followed by two more difficult division games to end the season against the Browns and then in Baltimore against Lamar Jackson and the Ravens.”

It’s certainly hard to argue with Frelund’s analysis when it comes to this four-game stretch the Steelers have later in the season against the Baltimore Ravens, Minnesota Vikings, Tennessee Titans and Kansas City Chiefs. While the Steelers game against the Vikings would be most people’s choice as being the easiest those four contests, that’s a Thursday night road game and just four days after their tilt against the Ravens.

By the time the Steelers hit that four-game part of their schedule, we should have a good idea as to what kind of team they have and if indeed they’re primed to make a run at a playoff spot. As Frelund pointed out, that tough four-game stretch is followed by two tough games against the Cleveland Browns and the Ravens to close out the 2021 regular season. That’s probably the toughest six-game stretch any team will have in 2021.