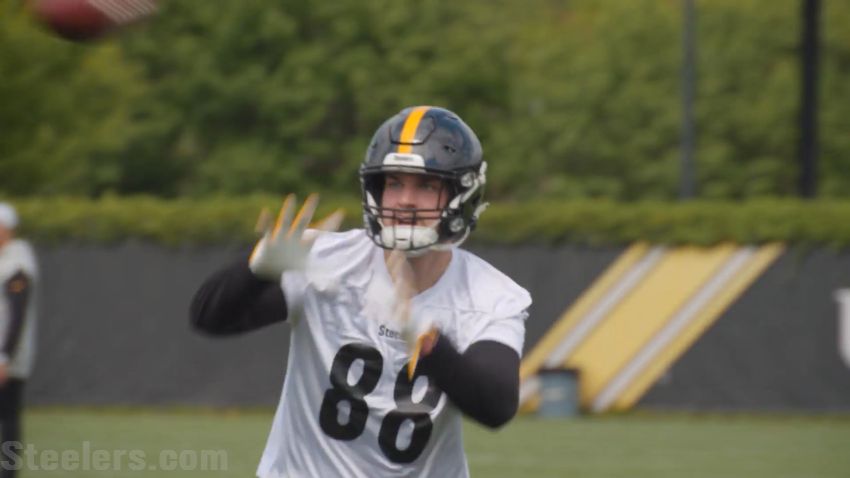 Will Pittsburgh Steelers tight end Pat Freiermuth be one the best rookies at his position in 2021? With him being the second tight end selected in the 2021 NFL Draft and a second-round pick, one certainly would hope that the Penn State product will ultimately and easily be one of top rookies at his position come the end of his first NFL season. On Monday, NFL Network analytics expert Cynthia Frelund explained why she expects Freiermuth to be the second best rookie tight end in 2021.

Here is her detailed reasoning:

Pro Football Focus data shows that the Penn State offense ran though Freiermuth with his 27.8 percent target share in the four games he played last season. When I tracked the former Nittany Lions star’s route running, I saw he was able to find a halo of at least six feet in diameter at the third-highest rate among all Power Five tight ends, and he earned the fourth-most yards after contact. Combine those metrics with the fact that Ben Roethlisberger is throwing shorter passes more often at this stage of his career, and you can see why Freiermuth could become a key target for Pittsburgh in his rookie year. Roethlisberger attempted a league-high 436 passes of fewer than 10 air yards last season, per Next Gen Stats.

The biggest obstacle that Freiermuth will likely face in 2021 as a rookie revolves around the fact that his offensive snaps figure to be limited to about 500 at the most. That’s because the Steelers still have veteran tight end Eric Ebron under contract for starters and they are paying him $6 million to boot. When Freiermuth is on the field during his rookie season, a lot of those offensive snaps will likely include him being part of personnel groupings that include himself and Ebron. Two tight end personnel groupings result in running plays quite a bit, however. When they are passing plays, seldom is a tight end targeted.

In total, the Steelers’ rookie tight end registered 19 receptions for 199 yards and 13 touchdowns in the redzone (Opp 20 To 1-Yd. Line) while at Penn State, according to our charting. Last season, Steelers quarterback Ben Roethlisberger threw 21 redzone touchdowns. Tight end Eric Ebron was on the receiving end of five of those.

On the surface, it seems like Freiermuth would do good to catch 20 total passes during his rookie season. Mike Clay of ESPN predicted right after the 2021 NFL Draft finished that Freiermuth would catch 14 passes for 145 yards and a touchdown as a rookie.