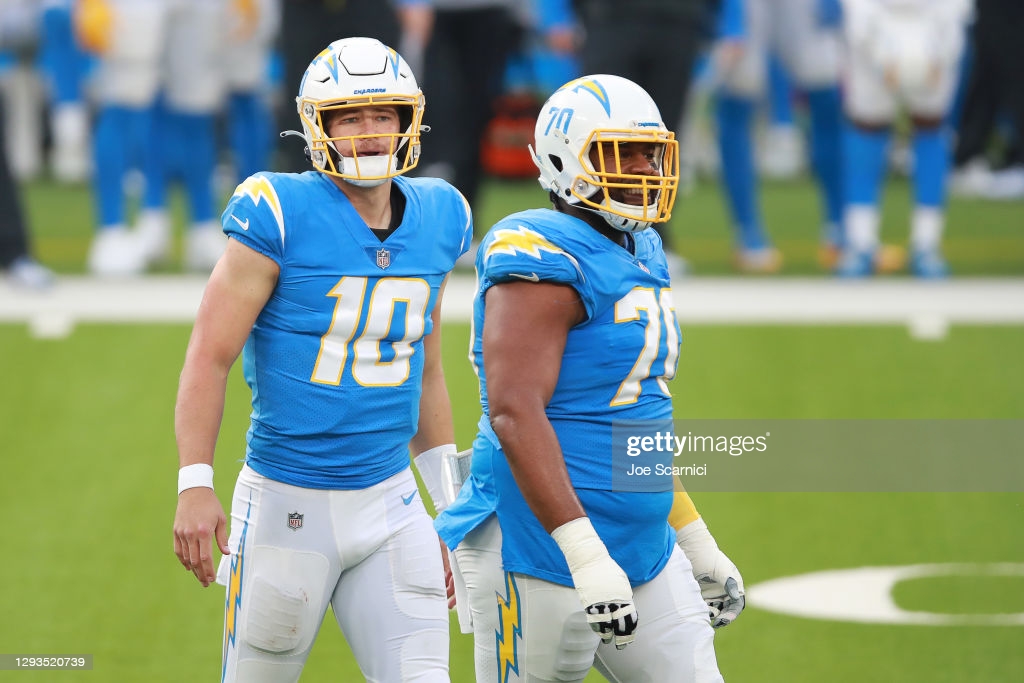 Ed Note: This article was written shortly before Turner signed with the Steelers on Thursday. But offers a look into his tape and how he’ll replace David DeCastro.

While Turner is a big name that Pittsburgh would be normally in position to sign, he saw his play drop off drastically in 2020 after being traded from the Carolina Panthers to the Chargers. Below are the Pro Football Focus grades on Turner for the past four seasons with his most recent campaign sticking out like a sore thumb based on the metrics they used to create the overall grade.

While PFF grades are a nice tool, I do question the effectiveness of their grading scale. For example, David DeCastro hasn’t graded above a 75-overall grade since 2017, with grades in the 80s and 90s in 2017 and 2016, respectively. I personally would have thought DeCastro was still one of the best guards in football prior to last season, but the ratings on the site say otherwise, hence why I use these ratings for Turner as a reference, but still take them with a grain of salt. However, when you pop in the tape, you definitely see cause for concern. His movement looked lethargic and hampered, showing slow feet in pass protection when working laterally and inconsistent hip bend to set a strong anchor he had been known for in Carolina. Take, for example, this rep against the Chiefs where Turner is at RG and just looks lost in pass protection, not moving well and fails to really make an impact.

His work in the run game which he had been heralded for during his time in the Panthers also was uninspiring, lacking that mean streak and leg drive to blow defenders off the ball. Here in the same game, we see Turner sit with his hips up high in his stance and get off the ball relatively slow, leaning forward into his block with the RT and generates little push forward upfront.

Now Turner’s tape wasn’t all bad as he did show moments in pass protection to keep the defender in front of him like we see on this rep versus the Broncos. Sure, the defender gets to his outside shoulder after attempting the arm over, but Turner does a good job recovering and pushing him out of the play.

Another example here where Turner starts helping on the 1-technique with the center but recognizes the standup edge rusher crashing hard inside on the RT, and correctly steps into the gap to neutralize the rush and give the RT time to recover and help, thus allowing #10 Justin Herbert enough time to throw in the pocket.

While Turner looked like a completely different player at times throughout the 2020 campaign, I do think that a lot of it can be attributed to the myriad of injuries he sustained throughout the year. He entered the season dealing with an ankle injury during training camp but appeared to be over it by the time Week 1 rolled around. Turner then suffered a groin injury in Week 2 and proceeded to miss the next six games with the ailment. He was also evaluated for a concussion after their contest in Week 14 in December, popping up on the injury report with an eye/neck injury the next week but went on to play. Turner suffered a chest injury in Week 17 versus Kansas City and was unable to return to action.

While age could be a factor in the drastic change of level of play, Turner is still only 28 years old, and the various injuries he dealt with tie directly to his performance. A groin strain can hinder an athlete’s ability to run, shuffle from side-to-side, and change directions effectively, which can tie into Turner’s 2020 game tape and the hesitancy he plays with in his movement. For comparisons sake, here is a clip of Turner from two years ago in Carolina, getting out in front on a pull to the right and proceeds to level the first defender he comes into contact with and keeps running up the sideline, leading the way for #22 Christian McCaffery for the long TD run, looking for bodies to block all the way to the end zone.

Turner has always been a fluid mover in space at the guard position during his days with the Panthers, boasting a 4.93 40 time back at the 2014 Combine while weighing over 310lb. What also jumps off the film with Turner is his nastiness both in pass protection and in the run game. He is a no-nonsense blocker who wants to see you on the ground and will do whatever necessary to put you there. Steelers fans may remember this block highlighted by Alex Kozora in their primetime matchup where Turner looks to aid the center in pass protection, taking a big side shot to uproot #94 Tyson Alualu off the ground and onto his stomach on the quick pass.

His 34” arms are used well when hand fighting with interior pass rushers, getting his hands on them quickly off the snap and can extend them away from his torso to keep them at bey. Here on this rep with the Lions, not only does Turner do a good job getting his hands inside, he also takes a dirty neck shot underneath the facemask, then proceeding to chop down his arms and send a chop to the defenders’ shoulders to send him to the turf. Turner has this move show up several times in his tape while at Carolina, and while dirty, it can be very effective at neutralizing the pass rush.

So, in the clips above we see a player that looks stiff and disinterested and the last few clips show an athletic mover in space that plays with an evident mean streak. So, what gives? As mentioned earlier, you have to imagine the injuries he dealt with during the 2020 season affected his performance, similar to what we saw of DeCastro and his dip of what has been top-tier play at the guard spot for nearly a decade. When healthy, Turner has shown the capability to be one of the better guards in football, especially when factoring in his movement skills and physicality in the run game.

What are your thoughts on Trai Turner’s signing with Pittsburgh and the discrepancy in his play in 2020 compared to his previous seasons? Do you think he is washed or that he was more of a victim to circumstance with the injury bug? As always, leave your thoughts below in the comments and thanks again for reading!