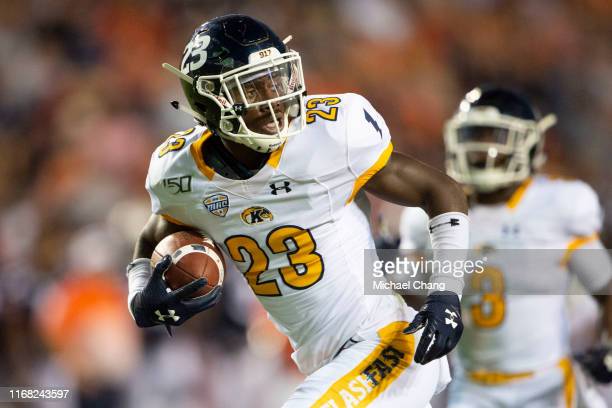 The Pittsburgh Steelers signed WR Isaiah McKoy at the conclusion of the 2021 NFL Draft as an undrafted free agent. Coming out of Kent State as an early declare for the draft, McKoy had a tough road ahead of him in terms of getting drafting. He only played in four games in 2020 due to the pandemic, but still posted impressive numbers in those games played, tallying 25 receptions for 455 yards (18.2 YPC) and five receiving scores.

The year prior, McKoy posted 56 catches for 872 yards (15.6 YPC) and eight touchdowns. As Dave Bryan pointed out in his contextualization of McKoy’s 2020 targets and when looking at James Wilford’s Player Profile on McKoy, we quickly learn that McKoy is a field stretcher that challenges defenses vertically to win on the deep ball. He actually led the MAC Conference in yards-per-catch in 2019, and 18.2 YPC in 2020 was near the top of the FBS.

Given his ability to win the deep ball and Pittsburgh’s success at identifying talent at the WR position, I wanted to dive in and analyze McKoy’s game in comparison to current Steelers WR James Washington who is scheduled to become a free agent after the 2021 season. Initially, when looking at the measurements and testing numbers of the two receivers provided below, there were some key similarities and differences that stuck out:

As you can see, McKoy gets the edge in height but cedes body density to Washington. Washington has slightly bigger mitts and an impressive wingspan for his shorter stature. Their short shuttle and 3 Cone times are nearly identical, indicating that both have comparable change-of-direction ability and lateral quickness. The 40yd dash times and vertical jump stick out, as you will see that Washington does display more burst and deep speed on tape than McKoy.

However, you do see McKoy’s ability to win vertically on film by the way he stacks corners and generates separation at the top of his routes. Watch this play against Eastern Michigan and how McKoy is able to run past the corner on the boundary as he opens up and tries to get a hand on him, getting a step on him and hauling in the touchdown catch over his shoulder with the defender trailing behind.

What is more impressive about this play is that it comes on fourth down, showing the QB’s trust in McKoy to come down with the ball in in the must-have-it situation. McKoy does basically the same thing on this scoring play against Utah State, this time facing a corner in off-man coverage, giving him ten yards of cushion in respect to his big play ability. It ends up not mattering as McKoy rolls past the defender in coverage again, effectively stacking the defensive back at the top as the defender transitions to a full sprint downfield, bringing in the reception with nearly five yards of separation from the burned defender and the safety rolling in from centerfield, having enough speed to get into the end zone and disrespect his competition afterwards.

For those who think that McKoy could only come up with big plays against small-school competition, watch this play against Auburn. He lines up on the left side of the formation and initially heads for an outside release to the sideline, but then cuts back inside to the field, getting the defender spinning in a circle as he reels in the long bomb touchdown strike with the defender trailing from behind.

Now Washington was known for the same skillset coming out of Oklahoma State, being able to win vertically against defenses despite not having the greatest timed speed. Take, for example, this play against the Patriots as Washington gets a step on #30 Jason McCourty up the sideline and hauls in the deep ball over the shoulder in-stride as momentum carries him out-of-bounds on the big gain.

The ability to play that role as the Z-receiver and deep threat for the offense? Check. Next is the ability to win combative catch situations. That was another traits Washington flashed coming out of college and has displayed in the league as well. Dave often refers to Washington having “lobster crackers” for hands, and we can see that come to fruition here on these couple clips. The first shows Washington again winning on the deep route in the end zone, coming down with the football while in contested coverage against the Browns defender while falling to the ground, being able to hold onto the football.

The second clip shows Washington winning the contested catch in the back of the end zone along the sideline as he displays good body control and strong hands as he snatched the ball out of the air in tight coverage against #22 Troy Hill with his hand in the way contesting at the catch point.

McKoy has shown a capability to make similar plays in contested catch situations, with a nearly identical play here against Bowling Green as McKoy aligns on the right side of the formation and runs the end zone fade, attacking the ball in the air with both hands and holds onto the football while in tight coverage by the defender who also gets his hand inside McKoy’s hands to contest the pass. McKoy manages to reel in the catch and complete the process of the catch to the ground for the score.

Despite not being the greatest athletes in terms of long speed or quick change-of-direction ability, both Washington and McKoy have shown the ability to create after the catch. Watch on this highlight catch-and-run after the simple curl route as he shakes off of the first tackle attempt and the evades the second as he runs up the sideline, getting to open grass she takes the short pass all the way to the house.

What about Isaiah McKoy who only runs a 4.68 40yd dash? Yup, he can create after the catch as well. Check out this play also against Bowling Green as McKoy catches the curl route on the right side of the field near the sideline a couple yards from the LOS. He manages to evade the first diving tackle attempt and out-angles the second defender in pursuit, picking up a block from a teammate near the goal line along the sideline and powers through the tackle attempt inside the five yard line, keeping his feet while staying in-bounds to reach out for the pylon for six.

Overall, it’s fairly easy to watch the tape and recognize Washington is more explosive and has a little more deep speed than McKoy. However, McKoy still wins vertically pretty consistently. Both players share a similar athletic profile as deep threats who aren’t the most physically imposing athletes on the perimeter but still can win the deep ball and are physical receivers at the catch point, being good options to have in combative catch situations.

The difference is that Washington was selected with a second-round pick and will need a new deal next offseason whereas McKoy is a UDFA and can be had on the cheap for the next three seasons. Should Pittsburgh elect to not re-up Washington after the 2021 campaign, I do believe McKoy can be a guy that sticks as the #6 WR on the depth chart or chills on the practice squad this season and can come in 2022 and potentially fill the void the loss of Washington could create.

Now this isn’t to say that McKoy would be a 1-for-1 replacement of Washington. Washington has the pedigree and athleticism in his favor. The point is, McKoy can be used in a similar role as Washington given his traits and the way he wins on the football field and can realistically become the team’s #4 receiver should they elect to re-sign Juju Smith-Schuster or draft a replacement for him. Being the guy to come in to occasionally spell Chase Claypool and possibly log 20-30 receptions over the course of a 17-game season shouldn’t be out of the question for McKoy should he show us a similar skillset that he showcased in the MAC.

What are your thoughts of Isaiah McKoy? Do you see similarities between he and James Washington? Please leave your thoughts below in the comments section and once again thanks for reading!