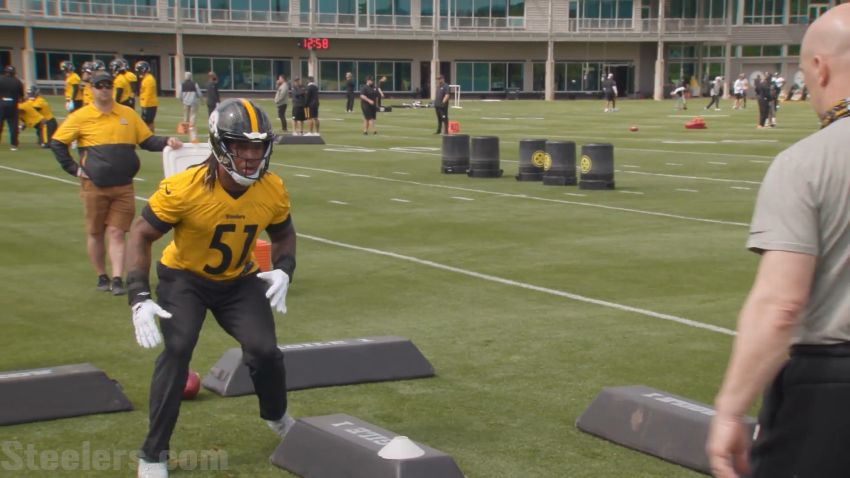 While the teams decision to re-sign Vince Williams and restricted free agent, Robert Spillane,  helped strengthen the rotation opposite of returning every down linebacker Devin Bush, depth at the position remained underwhelming ahead of the draft, with Marcus Allen and Ulysses Gilbert III serving as the top reserves.  Enter fourth round pick Buddy Johnson out of Texas A&M, a tackling machine who compiled 85 tackles, four sacks, a pair of forced fumbles, and a pick six as a senior, helping improve his stock with equally impressive testing numbers.

In Mike Tomlin and Keith Butler’s defensive scheme, which has traditionally opposed traveling cornerbacks from the boundary to match personnel, it is imperative that the team identified a capable coverage linebacker to pair across from third year star Devin Bush.  While Buddy Johnson, standing at 6’1 ½” 240 pounds, doesn’t appear to play quite up to the speed of his testing numbers, and certainly appears far too stiff at times, he has shown the ability to be effective in a variety of different coverage assignments.  While it is unlikely that Johnson will earn a starting role ahead of his rookie season, injuries will likely force him into a prominent role at some point in the season, potentially providing a preview for 2021, where he could earn a full time starting role alongside Devin Bush.

While clearly a better sideline to sideline athlete than current “Buck” linebacker starter Vince Williams, Buddy Johnson is best served when he is able to read and react downhill, making him a particularly effective defender in shallow zone coverage assignments.  Primarily serving as a “hook/curl” zone defender in the Aggies Cover 3, single high centric scheme, Johnson consistently displayed solid instincts and patience as a processor, while showcasing the necessary speed to rally to the football and tackle the catch.  Below, operating as a “hook/curl” defender in a Cover 3 scheme against the Arkansas Razorbacks, Johnson gains depth with two patient read steps before diagnosing the shovel screen, utilizing a T-step break to close ground downhill rapidly and stop the back just past the line of scrimmage with a physical stick.

Nonetheless, coming from an Aggies scheme which primarily relied on Cover 1 and Cover 2 man coverage schemes, similar to what we have seen in Pittsburgh over the past two seasons, Johnson is still relatively raw in zone coverage, which predictably causes occasional lapses in processing and eye discipline.  Below, once again serving as a “hook/curl” defender, Johnson’s eyes never leave the backfield, causing him to be stiff and inefficient in his lateral movement, ultimately causing him to react late on the throw, and vacating a window just past the sticks on the ten yard in route for a first down completion.

While Pittsburgh’s defense, particularly in sub-packages, relies heavily on man coverage schemes, Johnson will still be required to function as a zone coverage defender in the teams Cover 3, Cover 2, and occasional Cover 6 sets.  As a great open field tackle, with the necessary speed to close on pass catchers and force them to the ground efficiently, Johnson has the potential to develop into a formidable zone coverage defender alongside Devin Bush.  Although hip stiffness will likely always limit his ability to carry the seam in Tampa 2 schemes, a proverbial redshirt year should certainly allow the coaching staff to help improve Johnson’s eye discipline and processing before he is thrust into meaningful action.

While Johnson certainly has plenty of Vince Williams to his game in his block shedding prowess, hit power, and ability to live in opposing backfields, I found myself pleasantly surprised by his ability in man coverage assignments.  While Johnson has great closing speed when tracking sideline to sideline, he has also shown great patience and adequate ball skills when tasked with covering backs, tight ends, and slot receivers, consistently arriving at the catch point with violence to separate pass catchers from the football.  Below, in a one possession game against Vanderbilt, Johnson, aligned in man coverage on the running back to the boundary, flows laterally, scraping over the x receivers slant route and closing downhill rapidly to deliver a violent hit at the catch point, holding the back short of the sticks on third down.

This time in a bowl game against North Carolina, once again operating out of a man coverage assignment on the back, Johnson bluffs an A-gap blitz pre snap before opening to track the back across the formation, closing swiftly, and arriving to tackle the catch well short of the sticks on third down.

While his speed allows him to flow laterally when defending both stretch runs and swing passes, Johnson’s patience in man coverage, a rare trait for young linebackers, has me intrigued for his ability to transition to the NFL level.  Below against North Carolina, aligned in man coverage to the field, Johnson works laterally to match the backs release before centering himself, re routing the back with a two hand jam, and smoothly transitioning to stay in phase with the angle route.

As I previously mentioned, in Pittsburgh, maybe more than anywhere else league wide, linebackers must be able to hold their own in man coverage matchups against slot receivers and tight ends.  Below against LSU, aligned as the overhang defender to the field, Johnson bluffs a blitz before opening to match the slots release, staying patient in his shuffle technique before matching the receiver toward the sideline, and arriving at the catch point with a strong punch to dislodge the football, securing an impressive pass breakup.

While stiff hips limit Johnson’s ability to transition and carry speedy receivers vertically, his patience in coverage is already at an extremely high level for a rookie.  Moreover, his ability to track backs and receivers from sideline to sideline, rarely allowing himself to be outleveraged, will allow him to function in sub-packages at the next level, where his ability as a blitzer and run defender could prove invaluable.

One of the defining characteristics of Keith Butler’s scheme, which has remains unparalleled in its ability to generate pressure on opposing quarterbacks, is it’s usage of “green dog” blitzes, where a player is tasked with matching a back or tight end in man coverage, and becomes a free rusher if his assignment stays in to block.  Below against North Carolina, Johnson steps up to set the edge against the H-back before diagnosing the boot, flowing laterally, and slipping underneath the H-back to halt Sam Howell behind the line of scrimmage to secure the red zone sack.

Equally important, Johnson has a high functioning football IQ, allowing him to shut down quarterback scramble attempts, even when operating out of man coverage assignments, a rare trait for an incoming rookie.  Below, aligned as the overhang defender to the boundary, Johnson begins to follow his assignment, the back, across the formation before abruptly halting, and tracking a scrambling Sam Howell to the sideline, forcing him out short of the sticks on a crucial second half third down attempt.

Serving as a “green dog” blitzer in Pittsburgh’s defense requires a high IQ, but has produced countless sacks over the past two years, with Robert Spillane finding success this past season.  Simply put, Johnson possesses two traits, a high IQ which helps him trust his internal play clock, along with relentless pursuit of the football, which should theoretically allow him to function at a high level in Pittsburgh’s man coverage centric, green dog blitz scheme.

Overall, while it would seem unlikely that Buddy Johnson will gain any significant role exiting camp, it would certainly not be surprising to see him carve a role in the “Buck” linebacker rotation alongside Vince Williams by midseason, particularly on passing downs.  While Johnson’s zone processing could stand to improve, his man coverage ability and athleticism will allow him to effectively match running backs and tight ends in the Pittsburgh scheme.  Moreover, his ability as a blitzer along with his advanced football IQ should help him become a legitimate playmaker alongside Devin Bush in the man coverage heavy, “green dog” blitz scheme in 2021 and beyond.

Although I would worry about asking Johnson to match slot receivers vertically or carry the seam as a Tampa 2 defender, those are roles that will likely be left to Devin Bush as the “mack” linebacker.  While not quite athletic enough to transition to the “mack” role at the NFL level, Johnson’s ceiling is similar to that of Vince Williams, but with far more coverage ability, and speed to flow sideline to sideline in defending the pass, working alongside every down starter Devin Bush.