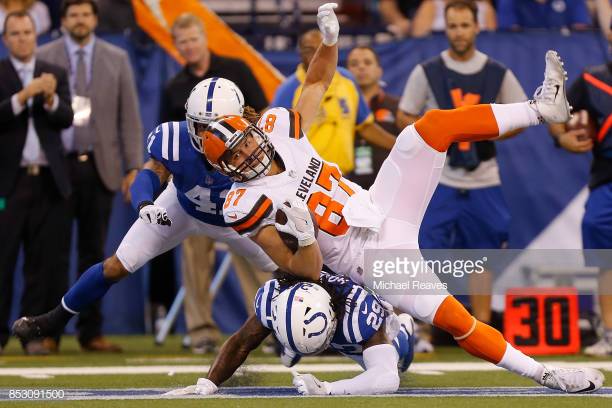 Malik Hooker was considered one of the top safety products to come out of college when he declared for the 2017 NFL Draft, ultimately selected by the Indianapolis Colts 15th overall. While he had a fine career when he was on the field, including seven interceptions, his difficulty staying healthy was a major factor in his fifth-year option being declined, which is why he was an unrestricted free agent this offseason.

Coming off of an Achilles injury that limited him to two games last year, and in an immensely depleted market, he understands the circumstances in which he finds himself, and so he is being careful about the team he chooses. He recently appeared on SiriusXM NFL Radio, discussing his free agency journey and what he is looking for in a team.

“Everybody knows the situation. I’m coming off an injury, most likely gonna probably get offered a one-year deal”, he told his hosts. “So for me, it’s just about fitting into the perfect system. To be able to go out there and show my talents. And for that fact, there was a couple teams that I visited that I felt highly of in that nature”.

The Pittsburgh Steelers are one of the teams with whom he has visited. It is unclear what type of deal they would be able to offer him, however, though of course they could manage it using void years as they have for other contracts this offseason.

Were he to sign with the Steelers, it would obviously not be as a starting safety, playing behind Minkah Fitzpatrick and Terrell Edmunds, but they could get creative with him. While he is capable of playing in the slot, they might rotate Fitzpatrick down there and drop Hooker out deep in some packages.

If given alternatives, it’s fair to assume that Hooker is not going to sign with a team that is going to use him purely as a break-glass-in-case-of-emergency-style backup, the way Sean Davis was a year ago. The only time he logged on defense last season was at the end of a blowout or two and in the season finale in which Edmunds did not play. Other parties handled any other in-game snaps.

In other words, the Steelers would need to have a role in mind for him in order to tempt him. He could fit in the Steelers’ system, which he says he’s looking for (naturally), but he also wants to be able to get tape out there in the hopes of getting the big deal next offseason. They do check other boxes, though.

“You also want to be going to a place where you’re welcomed and based off of how the type of player you are”, he said. “I’ve been in…the secondaries I’ve been in since I’ve been with the Colts has all been great guys morally on and off the field. That’s what I tend to want to stick to, that I don’t want to change that for sure. So, I mean, it plays a factor, I guess you could say in a way”.

The Steelers definitely have that with the likes of Fitzpatrick, Joe Haden, Edmunds, and Cameron Sutton, so if he’s looking for his fit within his specific position group, that could be Pittsburgh’s major sales pitch, regardless of what role he might play on the field. But what we do know about this team is that it would be a great help if they could secure quality depth at safety, and a healthy Hooker would do just that.