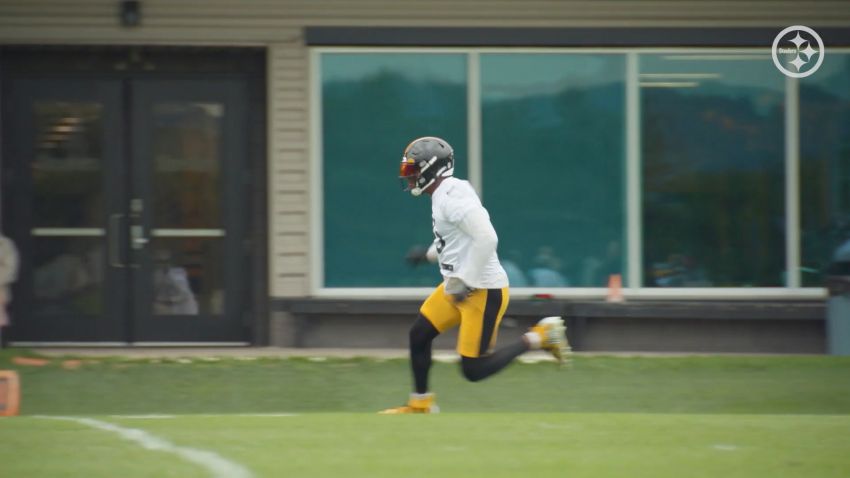 The Pittsburgh Steelers have invested $12 million and a second-round pick into the tight end position over the course of the past two years, signing Eric Ebron two a two-year contract in 2020 averaging $6 million per season, and drafting Pat Freiermuth on Day 2 of the 2021 NFL Draft.

While the team lost Vance McDonald to retirement earlier this year, they do have some young tight ends who are on the development track, like 2019 fifth-round pick Zach Gentry, and Kevin Rader, who finished the 2021 season on the 53-man roster.

Ebron is now the elder statesman of the room, something he takes pride in, and he likes what he sees within the position group, especially in his new number two. “Having Pat and some of the other guys we have, our tight end room is pretty strong”, he said of Freiermuth on Thursday.

“From the three days that I’ve been here—or two—we’ve dominated, and I say that with emphasis, because I feel like our room is pretty good, and we should carry a lot of stress on our room to be great every week, because we’re very capable of that”, he added.

The Steelers are, of course, a base 11 offense, which means that they primarily feature three-receiver sets, with one tight end and one running back on the field. Ebron did rank 13th among tight ends in snaps played a year ago, however, and even McDonald managed close to 500 snaps, so they did get their work even last year.

The combination of Ebron and Freiermuth, however, offers the Steelers a pass-catching duo at the tight end position that, perhaps, they have never before had in their history. Ebron is very capable of being a 50-500-5 guy as a base stat line, and Freiermuth could potentially duplicate that, with his collegiate success in the red zone.

“I do see us dominate, and I do see us making a lot of plays, and I think he’s very capable of that at a very early age, very early experience”, Ebron said of the tight end group with Freiermuth in the mix. “In this offense with Matt Canada, I see a lot from all tight ends, whoever’s on the roster, it’ll be good. Two tight, three tight, we’ll mix it up and it’ll be fun”.

Despite Ebron’s enthusiasm, it remains to be seen just how much fun the tight ends will have this year, at least as it concerns the frequently of two-tight end sets, particularly in passing situations. One would hope that a wise offensive coordinator would exploit the lack of predictability of having two tight ends who can catch, but so much of what we think we know of Canada is really just what we’re assuming.