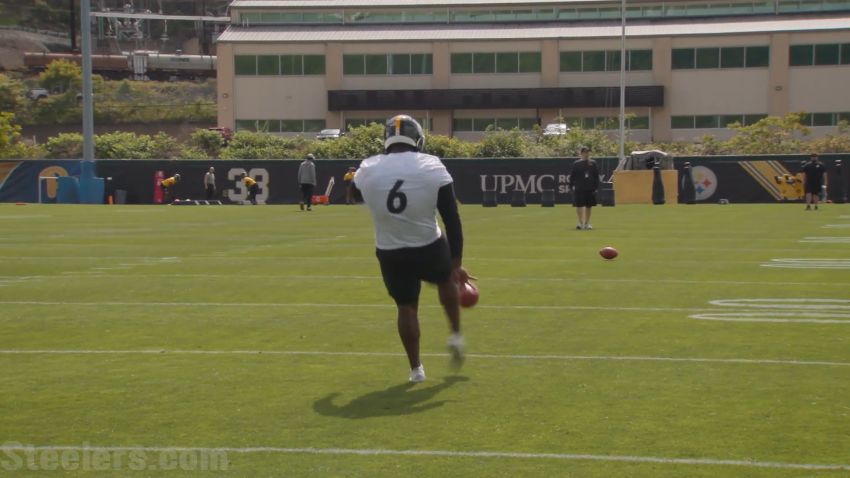 Danny Smith has the solution to the Pittsburgh Steelers’ short-yardage running woes.

Of course, Smith was being tongue-in-cheek about suggesting 7th round pick Pressley Harvin III being the team’s answer but it’s hard to imagine anything worse than what the Steelers did last season. Smith spoke to local media on a Zoom call and was asked about his new punter and biggest competition to Jordan Berry, who has held the job since 2014.

“The best thing we can do with this guy is you know about the quarterback sneak play,” Smith joked. “You’re going to see a punt sneak play with this big dude. That’s the first thing we started working on. Maybe he can get a yard.”

Harvin III has quickly become a fan favorite and his Steelers’ fan fame will only soar once he takes the field for training camp. Everyone loves a big punter who can boom the heck out of the football and he does both well. But that alone isn’t nearly enough to make a football team. Especially in a place like Pittsburgh, which has always valued placement, hangtime, and net over air yards.

Harvin’s biggest issues in college were his consistency so avoiding those “junior varsity” punts, to steal the Tomlin term, will be key for him this summer. Punters don’t have a hundred opportunities to prove themselves like other positions. They get about two dozen so the margin for error is razor thin, especially against a veteran, known option in Berry.

Smith outlined the goals for Harvin III to hit this summer.

In our pre-draft rankings, we tabbed Harvin the second best of the four punters we profiled only behind Ohio State’s Drue Chrisman. Harvin had, by far, the quickest snap-to-punt time at 1.85 seconds. He also served as the Yellow Jackets’ holder, crucial experience that not every punter who enters the league has. But Smith explained Harvin’s situation in school was unique.

“They had a situation at Georgia Tech that they used two kickers. It was much like a pitcher in a catcher. One had a holder that he liked and the other one had another holder he liked. So you could call it part-time hold when his guy kicked, he held, when the other guy kicked, the other guy held. For whatever reason. I’m not judging it. But that’s what they did. So yes, he has experience holding. Yes, he’s quite capable. Yes, he has improved since he’s been here.”

But Smith said Harvin still has room to grow to become a better holder. Like any other aspect of the NFL, the speed of the game is much different.

“We’re going to [work on holding] tomorrow at practice again. Just a sense of urgency has to be understood. The speed of which these kickers get the ball in this league is a lot different than college.”

It’s clear and fair the Steelers are open to upgrading at the position and to start last year, Berry was replaced, but the team brought him back a month into the season and Berry punted well for most of the season. It’s one of many battles we’ll be keeping an eye on this summer.