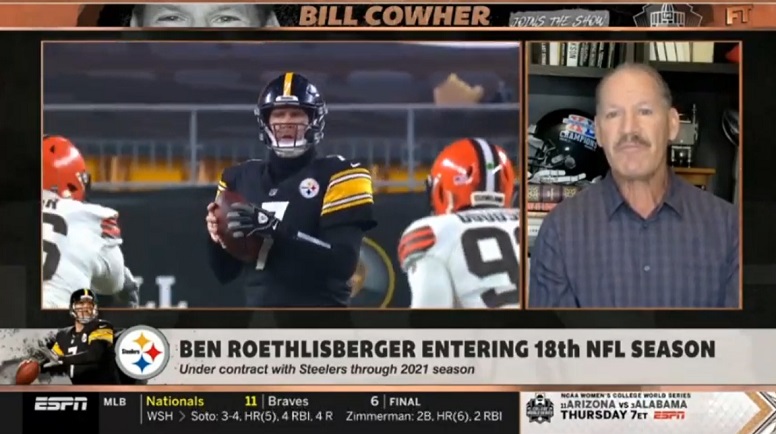 In January of 2020, far before the world took a turn due to the ongoing COVID-19 pandemic, former Pittsburgh Steelers’ head coach Bill Cowher received news he’d been working towards his entire life.

Cowher, who posted a 161-99-1 overall record as coach of the Steelers from 1992 to 2006 and guided them to six AFC championship appearances and two Super Bowl appearances, was voted into the Pro Football Hall of Fame. One of the first people to reach out and congratulate him on his Hall of Fame announcement was future first-ballot Hall of Fame Steelers’ QB Ben Roethlisberger.

In his new book “Heart and Steel” Cowher wrote that Roethlisberger was the first to reach out to him just before 8 p.m. that night in January, texting him a congratulatory message.

“Congratulations, Coach. I’m so happy for you,” Roethlisberger said in the text, Cowher wrote.

“Through the years, he’d sent multiple messages saying he wished he’d played for me later in his career,” Cowher wrote. “He says he would have appreciated me more than he did in the first few years. I only coached him for three seasons. He’s had a tremendous career, and Mike Tomlin’s done a great job with him.”

Though they were together just three seasons before Cowher retired, the duo won 29 regular season games and appeared in two AFC Championship Games and one Super Bowl, ultimately winning Super Bowl XL for Cowher’s lone ring.

Cowher and Roethlisberger had a special relationship, one that featured the occasional clash, which was expected between an old, reserved coach who believed the position should be played one way, while the young, brash, hot-shot QB thrived off of improvisation. Overall though, they were a great pairing, one that worked well together and translated off the field as well.

Roethlisberger continues to get a bad rap across the league for his transgressions off the field earlier in his career, but it remains clear to this day that he’s revered by former teammates and coaches, whom he maintains a close relationship with all these years later.