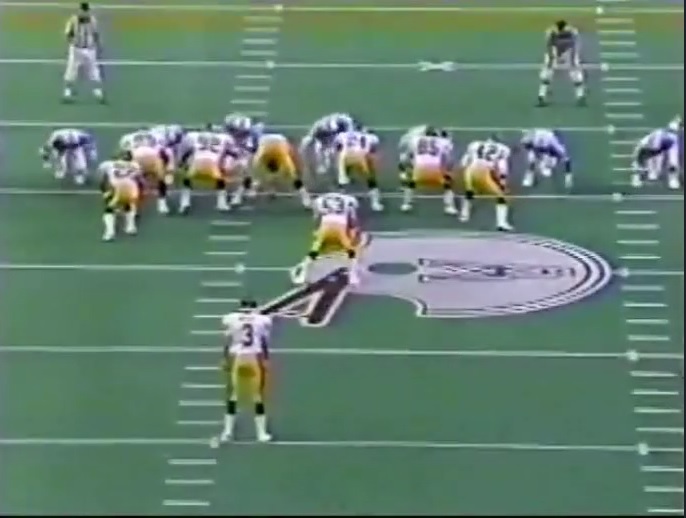 Bill Cowher was known for being a coach willing to take chances. To use his entire bad of tricks. In fact, Cowher says he liked to run gimmick plays early in games just to keep defenses honest the rest of the way.

But the very first chance Cowher took wasn’t supposed to happen. That’s what he says in his new book Heart and Steel. The Steelers were playing the Houston Oilers. Falling into a quick hole, Cowher told special teams coach John Guy before the drive to run a fake punt if the offense got inside the 50, surprising and countering an aggressive Oilers’ punt rush.

“They appeared to be well on their way early as they jumped out to a 14-0 lead…so I decided to shake things up. I knew that the Oilers liked to put pressure on the punter so I told John Guy, our special teams coach, ‘First punt we get, if we’re inside the fifty, they’re going to be coming after us. Let’s run a fake punt.’ Then I added, ‘but don’t make it conspicuous.’

“With third and 5 on their 42-yard line, our quarterback, Neil O’Donnell, dropped back to pass. He took a 14-yard sack, which put us on our own 44. Since we were no longer inside the 50, the fake punt was obviously off.”

After the negative play, Cowher got into a discussion with OC Ron Erhardt. And he didn’t realize the fake punt was still green lit.

“As I was talking to Erhardt, I looked at John Guy. He had a huge smile on his face and was motioning a thumbs-up. Oh no, I thought. I dropped the phone. ‘John, tell me you didn’t call the fake punt.’

‘You told me to. You said the first time we punt-‘

‘I said inside the fifty! But we’re not over the fifty-yard line.’

He nodded. ‘Yeah, but I had to tell Mark [Royals, our punter] before the third-down snap so it wouldn’t be conspicuous.'”

So on 4th and 15, the Steelers ran the fake. Punter Mark Royals threw the ball downfield to Warren Williams. Thankfully, it worked. The Oilers brought the house, leading Williams to be wide open and take the ball down to the two-yard line. Barry Foster scored on the next play. Pittsburgh’s comeback began and they won 29-24.

“During and after the game I laughed to myself. If people only knew the real story of that fake punt . . . that first win enabled me to begin earning the trust of the team.”

A pretty cool story, and fortunate outcome for Cowher and the Steelers. Had it failed, the Steelers might not have won that game.

However, Cowher’s story is slightly off. O’Donnell wasn’t sacked on the third down before the fake. It was a Dirt Dawson clipping penalty that put the team into a big hole. On third down, Dwight Stone dropped a pass going over the middle, forcing the punt. And the Steelers were at Houston’s 44, not their own, so Guy followed Cowher’s orders, though I’m sure Cowher probably didn’t love the idea of a fake punt on 4th and 15.

The cameras caught Bill Cowher’s reaction and yeah, it was definitely one of a guy who absolutely did not want his team to do that.

All’s well that ends well. The Steelers won Cowher’s debut, went on to win 11 games that season, and began to turn around the team of the 80s and 90s who turned into a mediocre, fractured team. And it marked the start of Cowher’s Hall of Fame coaching career.