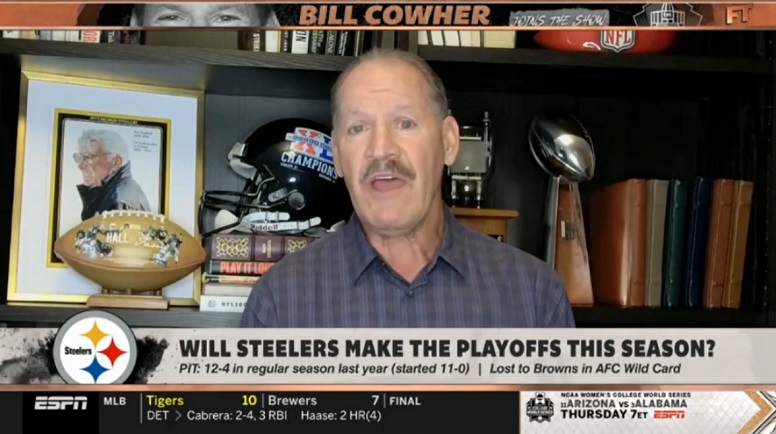 With the start of the 2021 NFL season now just 14 weeks away, there are still a lot of major media analysts who believe that the Pittsburgh Steelers will ultimately miss the playoffs this coming season. Several of them even believe this year’s team will also finish with more losses than wins for the first time since 2006. Former Steelers head coach Bill Cowher, who is now an analyst for CBS Sports, isn’t one of the many who believe the team he once led will miss the playoffs in 2021, however.

“I think they will [ make the playoffs],” Cowher said a few days ago on ESPN’s ‘First Take’ show. “They’ll be in the hunt. When you look at them, yes, the division has gotten tougher. But look, I love the pickup Najee Harris. So, I think they need to get back to running the football and having more balance in the offense will take a little bit of that pressure off of Ben [Roethlisberger]. He’s got a lot of weapons. The offense is going to be circled. It’s all going to come down to the offensive line. There’s a lot of changes taking place there. If they can come together, like the best way to help an offensive line, run the football.”

Cowher’s pretty much right as it should all come down to the Steelers offensive line and the team’s ability to run the football a lot better in 2021 if they are to make the playoffs this season. That’s pretty much why the team spent their first four draft picks this year on offensive players with two of the three being running back Najee Harris and center Kendrick Green. The addition of tight end Pat Freiermuth in the second round should pay some dividends in the running game in 2021 as well.

While the Steelers did lose some key defensive starters during the offseason to free agency in outside linebacker Bud Dupree and cornerback Mike Hilton, in addition to cutting cornerback Steven Nelson, Cowher believes the team still has what it takes on that side of the football to make it to the playoffs and especially with them getting another starter back healthy this summer.

“And defensively, they get Devin Bush back and that’s a top-tier defense,” Cowher said. “So, yes, the division has gotten better, but they’ve got a lot of veterans in that locker room that know how to win close games and that’s what’s going to come down to. And they’ve got a great kicker and kicking game. So, I think that they will be in the hunt and yes, I would say that they will make the playoffs.”

So, are people in essence overlooking the Steelers this summer when it comes to the 2021 season and just how good can this year’s team be and how far can they go? Cowher circled back to a few previous key points he had made as part of him answering that question.

“Well, I’m not sure what people are looking at them,” Cowher said. “Again, I go back to the same thing, it comes down to the offensive line. And they lost Maurkice Pouncey and that was a big part of what they want to do. Alejandro Villanueva left and went to the Baltimore Ravens, a left tackle. So, there’s some new people coming in right there and that offensive line needs to gel. And I go back to the same thing, Najee Harris can catch the ball out of the backfield, but you bring him in there to build an offense around running the football. That will take the pressure off the quarterback. If The play action game goes, you have the group of receivers that they have. And defensively, getting Devin Bush back, that is a good defense. So, again, if they can stay healthy, if the offensive line can play well, they will be in the hunt.”