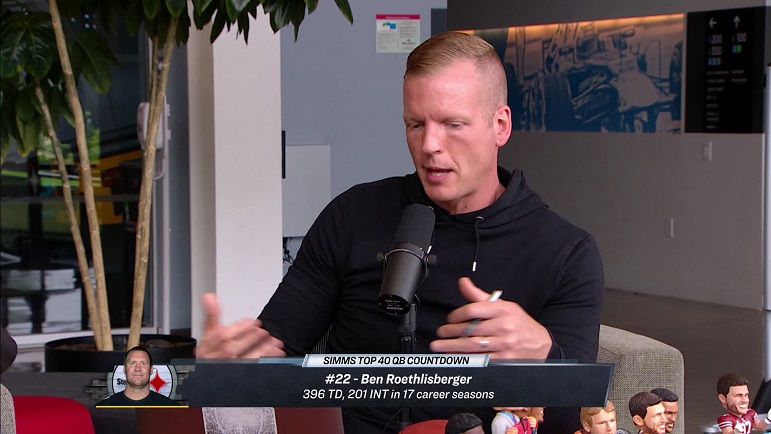 After reaching as high as No. 6 ahead of the 2019 season, Roethlisberger has plummeted all the way to No. 22 this year despite putting up a strong comeback campaign in 2020, throwing for 3,803 yards, 33 touchdowns and 10 interceptions.

A large part of Roethlisberger’s fall has to due with his age and overall declining play, Simms said on the Chris Simms Unbuttoned Podcast.

“I love me some Big Ben. Yes, he’s fallen down the rankings a little bit. I think, I think it’s pretty obvious of why. Come on. Anybody watching football last year, it wasn’t his best year. There’s no doubt about that. I don’t know how banged up he was. I know he played through some knee injuries and things like that. He was coming back from the elbow surgery. Yeah, I get it. I know he had to deal with that. You know, I still think he’s got talent. I do. I still think you can win the Super Bowl with Big Ben, but you know, it was, it was underwhelming towards the end of last year.”

It was certainly underwhelming last year towards the end of the season when the Steelers went 1-5 (including the playoff loss to the Cleveland Browns at Heinz Field) and were grossly one-dimensional with a run game that was non-existent.

Despite it being an ugly close to the season for the Steelers that featured up-and-down play from Roethlisberger drive to drive, Simms said he was excited to see what Roethlisberger put on tape early in the year when he was relatively healthy, meaning his No. 22 ranking – behind names like San Francisco’s Jimmy Garrappolo, Carolina’s Sam Darnold, Indianapolis’ Carson Wentz, and New England’s Cam Newton — is largely based on recency bias rather than the full picture of 2020.

“I was excited the first few games of the year and I thought Ben’s arm looks good and he was moving around a little bit. I know he’s acknowledged he banged up his knee, I think in the first week of the year against the Giants a little bit, but then did it again, like maybe Week 4 or 5 where he got both knees in one game,” Simms said. “And I thought when I went back and watched film and I said this because I did this earlier this offseason where I saw a definite significant drop in his game at that point in Week 4, I think it was maybe Week 5, but just lack of movement in the pocket.

“Everything became the dink and dunk. Let me look for the short throw and listen, I don’t know if that’s all him, but I think of course he has a great influence in it. He acknowledged he might’ve changed some run plays to those type of pass plays. And I also think that, you know, Randy Fichtner and all those were probably bowing down to Big Ben to a degree into what he wanted to do as well.”

Simms’ sense of time is way off. Roethlisberger suffered a knee injury in the Week 9 game against the Dallas Cowboys, leaving late in the second quarter before coming out for start of the second half. Until that point in the season, Roethlisberger had not once appeared on the Steelers’ injury report for anything other than non-injury related rest as a veteran during the week. After the Cowboys game though, Roethlisberger appeared on the injury report ahead of the Week 10 game against the Cincinnati Bengals with a knee injury after being activated from the Reserve/COVID-19 list.

So, it wasn’t until Week 10 that Roethlisberger’s lower-half mechanics and strength played a factor in some of his regression, rather than Week 4 or 5 that Simms is hinting at, which would have come against the Philadelphia Eagles or Cleveland Browns at Heinz Field.

Aside from the inability to understand time, Simms is still a believer in Roethlisberger’s arm overall, even after coming back from reconstructive elbow surgery. However, he said that for the Steelers to still win with Roethlisberger, they need to do the right things on offensive, which means more balance.

“I still think he’s got a good arm to make big plays down the field. I saw enough big throws last year, and I know the other day like, he made a comment like, oh, I did have reconstructive surgery. Cause he was, he was asked about his lack of deep ball throwing,” Simms said. “Oh, I’m sure he wasn’t at a hundred percent. I can’t sit here and say though, on film that I felt like his elbow was a part of the issue. I don’t think that he led, he was second and third and football and passing attempts. So if his arm was really bothering or not a hundred percent, I don’t think Pittsburgh would have thrown the ball 608 times is what I’m saying. And I believe that’s the exact number, if I recall correctly.

“They became predictable that way. It definitely did. And I don’t know how much of undoing he had in that, but lack of mobility, sometimes lack of aggressive throws down the field, all of those things. I think that’s where right now I just question where big Ben is at, you know, and that’s why I put him at 22. Yeah, that’s really the biggest reason. And I just, I do want to emphasize, I do think they can still win with him. This is not like, oh man, he’s 22. It’s over.

“No, they just gotta, they gotta do the right thing on the offensive side of the ball to help him and be the best team they can be with this current roster they have. And that’s, to me, what I’ve said on PFT many times is going, they got to take the Brady and Buccaneers route, which is protect the QB, run the ball. And then when we do drop back, yeah, we’re pushing the ball down the field, but you’re protected. We know you’re older, your body’s beat up. And that’s what happens to these old quarterbacks. You’ve heard me say that about Brady the last two years.”