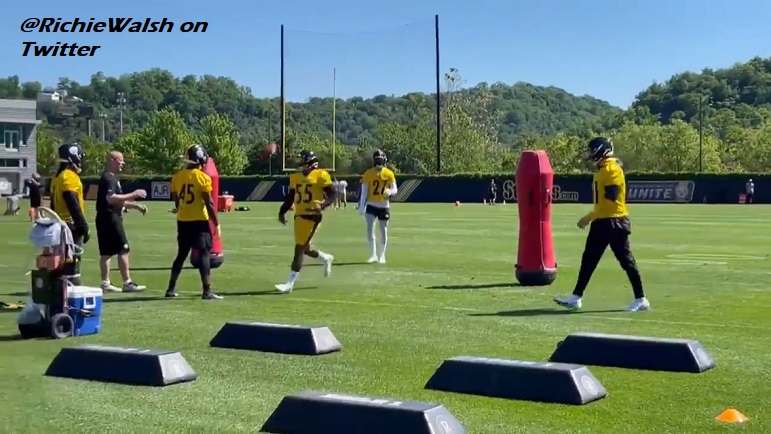 Thursday appears to have been a big day for certain Pittsburgh Steelers inside linebacker that wears No. 55 as that player was spotted on the field during the team’s OTA session by several media members. Tackle Zach Banner confirmed on Thursday after the session that No. 55 did indeed practice some, just as he did.

And, while I can’t tell you who’s here or not here, I can say this is the first time I’ve photographed a No. 55 during stretch. pic.twitter.com/0ixaPflL9I

As for what all level of participation that No. 55 had on Thursday, it’s hard to say. At least we have some evidence courtesy of a video released by Richie Walsh on Twitter. All that said, with that certain No. 55, if it indeed is the No. 55 Steelers player we think it is, now being just seven months removed from his torn ACL, odds are good that that former first round draft pick out of Michigan is being super-limited right now.

In a related note, Devin Bush, who also wears No. 55, said way back in February during a Steelers Nation Unite conference call with fans that his recovery is going well and that he’s on course to be ready for the start of training camp in late July.

“Rehab is going good,” Bush said. “I’m on schedule. I’m feeling stronger week by week. I’m just trying to get ready physically for next year, especially for camp. I’m just staying positive about things and doing everything I can do possible to make myself one of the best players next year.”

During his talk with the media on Thursday, Banner, who like Bush is attempting to return in 2021 from a serious knee injury suffered in 2020, talked some about the Steelers linebacker that wears No.55 and how his rehab seems to be going so far.

“But my guy has been working day in and day out right next to me and I can’t say anything bad about him,” Banner said of Bush. “He hasn’t missed a day. He’s been out here all offseason, just like me. We live out here in Pittsburgh and we’re yinzers and we put on the black and gold and we understand that and we welcome it.”

I would expect No. 55 to be part of the remainder of the team’s offseason program on a very limited basis moving forward. That’s exactly what Banner indicated was likely to be the case with both the linebacker and himself during his Thursday media session.