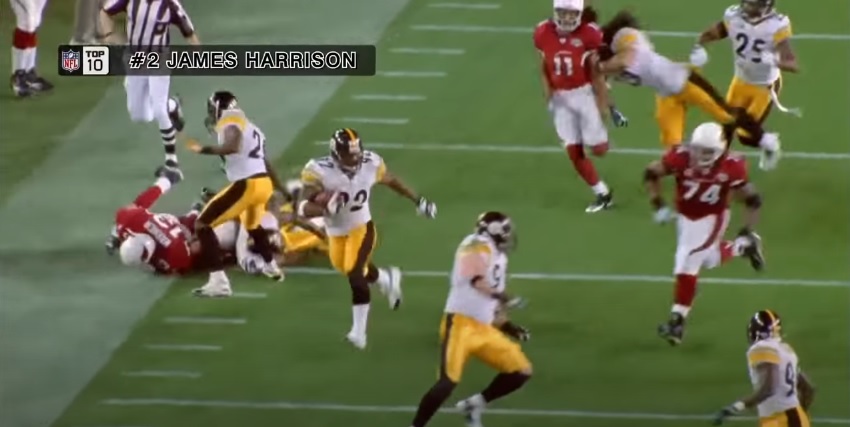 I want to focus on the underrated players who made those plays happen. For just a second, taking the focus off Parker, Harrison, Harris, and whoever else we come up with. And highlight those who made key contributions that led to those amazing moments.

In our last article in this series, we pointed out James Harrison’s pressure on Troy Polamalu’s pick-six of Joe Flacco that sealed the Steelers’ trip to Super Bowl 43 against the Arizona Cardinals. In that game, Polamalu repaid the favor.

That game had the most iconic defensive play in Super Bowl history (and arguably the most iconic offensive play, for that matter). James Harrison’s 100 yard INT return for a touchdown to close out the first half. With the Cardinals down 10-7 and on the Steelers’ doorstep, Harrison undercut Kurt Warner’s throw on an attempted slant and was off to the races. That play itself will never be forgotten. Harrison sprinting down the right sideline, weaving through a mess of players, securing the ball and tumbling over the goal line as the half expired. On that play, you can see all the great blocks thrown out in front to lead the way.

One block almost never talked about is Troy Polamalu’s. That’s largely because it happened behind Harrison, nearly out of the camera’s view. You only get a good look at it on replays and even then, blink and you’ll miss it.

Here’s the thing. By the play’s end, Larry Fitzgerald caught up to James Harrison. Had he gotten there even a yard sooner, Harrison wouldn’t have scored and the Steelers wouldn’t have come away with points. Still would’ve kept their three-point lead but hey, who knows how that game ends.

What if I told you Fitzgerald should’ve caught Harrison 40 yards sooner? He was on track to. Fitzgerald got back into the play and as Harrison crossed about midfield, Fitzgerald was less than ten yards behind. And closing fast. 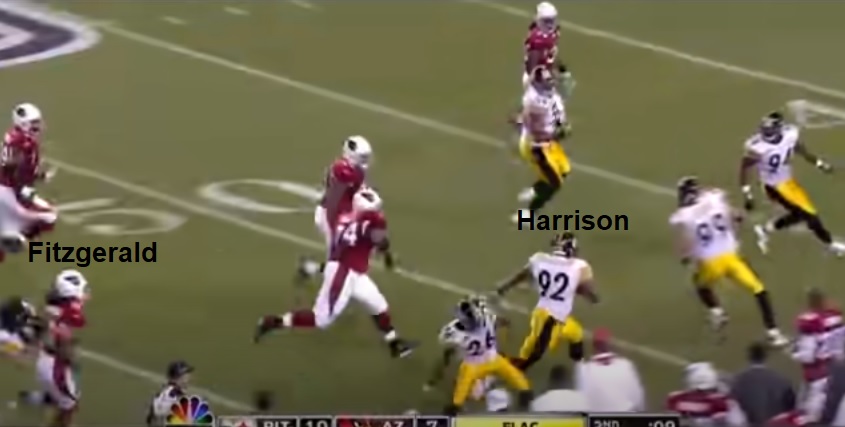 See that blob, that mess of hair on Fitzgeral’ds hip? That’s Troy. Flinging his body into Fitzgerald’s. It didn’t knock him down but it bumped him, caused Fitzgerald to run into Deshea Townsend, and more importantly, put him along the sideline. And into traffic. Fitzgerald’s path was now altered into his own Cardinals’ sideline. And though he kept running, he found himself approaching more obstacles. He ended up running safety and teammate Antrel Rolle on the sideline, significantly slowing him down, and that’s the reason why he didn’t meet Harrison until the goal line.

Watch the bottom of the screen as Harrison cuts back. That’s Rolle getting in Fitz’s way.

Had it not been for Troy’s block, Fitzgerald catches up a lot sooner. And though not guaranteed, odds are good he tackles James Harrison. No touchdown. Perhaps no Super Bowl win.

I don’t believe there’s a better encapsulation of “underrated moments of big plays” than what Polamalu did here. Never gets noticed. Never gets discussed. But that was the shove that changed history and led to the Steelers winning their 6th Lombardi.

Check out the block below. What a moment.