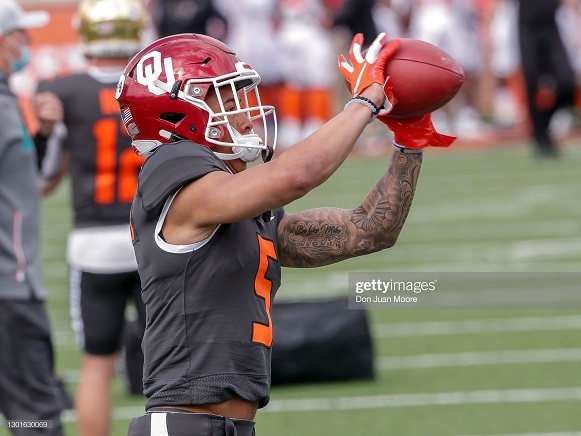 The Pittsburgh Steelers have selected Oklahoma defensive back Tre Norwood with the 32nd pick of the sixth round of the 2021 NFL Draft. It was the 245 pick overall.

2020
Played in all 11 games and made five starts … all five starts came in last six contests … Big 12 co-leader and tied for third nationally with five interceptions (all came in season’s final six games) … totaled 23 tackles (12 solo, 11 assists) and two pass breakups … named Outstanding Defensive Player of the 2020 Goodyear Cotton Bowl Classic after returning an interception 45 yards for a touchdown and adding two tackles in win over No. 10 Florida (12/30) … registered a season-high six tackles (four solo) and an interception in the end zone in Big 12 Championship win vs. No. 8 Iowa State (12/19) … returned an interception 34 yards and tallied three stops (one solo) vs. Baylor (12/5) … notched two interceptions (both in first quarter) in first start of season at Texas Tech (10/31) … recorded three stops (two solo) at TCU (10/24) … registered three solo tackles vs. No. 22 Texas (10/10).

2019
Missed season due to injury sustained in August camp.

2017
Played in all 14 games with starts in each of the last five … ranked second on team with eight pass breakups … finished with 30 tackles … made four tackles and broke up a pass vs. Georgia in CFP Semifinal at Rose Bowl (1/1) … recorded five tackles against TCU in Big 12 Championship Game (12/2) … finished with four tackles in start against West Virginia (11/25) … broke up two passes and made five tackles in start at Kansas (11/18) … matched career high with two pass breakups and had a tackle in first career start against TCU (11/11) … led team with a career-high seven tackles and broke up two passes at Oklahoma State (11/4) … broke up a pass and made two tackles in OU debut against UTEP (9/2).

HIGH SCHOOL
A three-star recruit according to 247Sports, ESPN, Rivals and Scout … rated as the No. 53 cornerback in the country by 247Sports, No. 93 by ESPN and No. 105 by Scout … tabbed as the No. 4 player in the state of Arkansas by 247Sports and No. 9 player by ESPN … named to the 2016 All-Northwest Arkansas Democrat-Gazette Division I First Team … chose Oklahoma over Louisville, Notre Dame, Tennessee and others.

Norwood ended his collegiate career on a tear, recording an interception in four of his last six games with Oklahoma, including two on the road against Texas Tech. His five picks were good enough for the third most of any player in the nation. He returned one of those interceptions, against Florida quarterback Kyle Trask, for a touchdown in the Cotton Bowl.

Norwood missed the entire 2019 season due to a non-contact knee injury he suffered. Norwood had a torn ACL. He played cornerback, nickel back and safety during his three seasons with Oklahoma, starting in 24 of the 39 games he played. He tallied 111 total tackles, 21 pass deflections and six interceptions in his career.