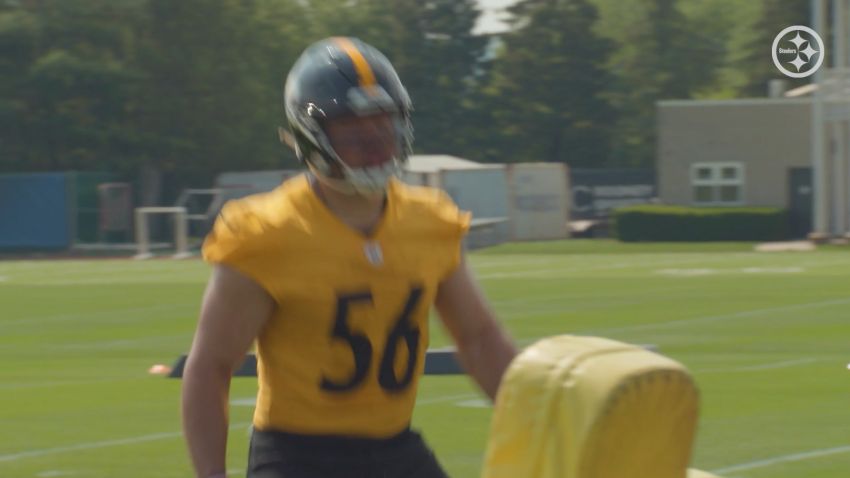 The Pittsburgh Steelers always expect significant jumps from their second year players every season. This year that group of players includes the team’s 2020 third-round selection, outside linebacker Alex Highsmith. On Wednesday, Highsmith talked to the media after the team’s second OTA session of the week. During that interview he detailed areas he’s looking to make strides in when it comes to his second NFL season.

“I feel like I can always just continue to work on my mental game, you know, study more film and just having the most IQ that I can have,” Highsmith said. “Just one thing that came into this offseason wanting to do is just to get stronger, you know, gain a few pounds, but really just put on a lot of muscle and stuff. I feel like I’ve done that. And I feel like I’ve got a lot stronger. So, just being strong in the run game, being strong in the pass rush, and also just polishing my moves. Polishing the moves that I have right now. So, I felt like, you know, it’s been a great offseason so far and you know, I’m ready for people to see all that I’ve been working on.”

Hearing Highsmith saying that he looked to get stronger this offseason isn’t a bit surprising. You hear that quite a bit year in and year out from second year players. While Highsmith did progress noticeably well as a pass rusher during his rookie season, his play against the run in 2020 was very much up and down and thus inconsistent is the best way to describe it. With him now taking over as the starter with Bud Dupree now out of the picture, his play against the run will surely be tested right out of the chute in 2021.

As a rookie in 2020, Highsmith registered 48 total tackles, two sacks, an interception and a pass defensed. While five of his tackles resulted in lost yardage, just four of those came against the run.

After Highsmith talked on Wednesday about getting stronger and adding a few pounds, he was asked to add some specifics to those particular comments and he obliged.

“Yeah, I mean I gained about three pounds, but I felt like it’s a good three pounds,” Highsmith said. “I was around 250 [pounds] last year and right now I’m 253, 254 [pounds]. So, I’m trying to maintain that right now and just be at that going into camp this season.”

So, look for Highsmith to show up at training camp this year stronger than he was in 2020 as a rookie and tipping the scales at around 253-pounds or so. Highsmith has already done some offseason training once again with Tarence Williams, instructor of athletes and owner of Beast Behavior Training. We can probably expect that to continue as the offseason progresses with both posting videos of some of that on Instagram.