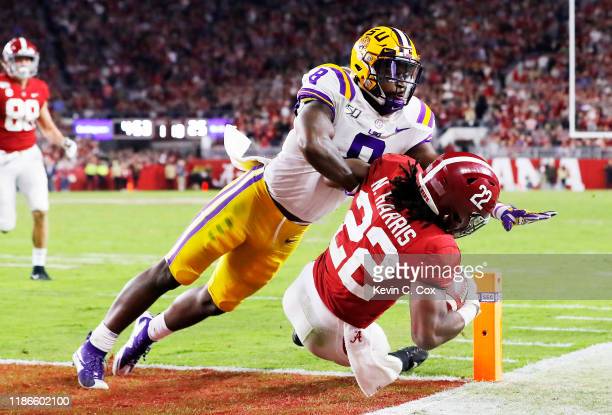 Najee Harris may be listed as a running back but his game is much more than being able to hand him the ball. He was drafted as the complete package, their feature back, and the Pittsburgh Steelers seem intent on getting him the ball however they can.

Harris spoke with reporters following Day Two of the team’s rookie minicamp and compared how he was used in college to how the Steelers have been working with him.

“A lot of things that are similar is how they’re going to line me up wide,” Harris said in a Zoom call provided by the team. “Utilize the running back in the passing game. Out wide, the slot, the X position.”

The “X” position is the receiver on the backside of the formation, often isolated away in a 3×1 look. Antonio Brown’s old spot.

Harris’ receiving ability isn’t new nor a surprise He was one of the best pass-catching running backs in this year’s draft class, arguably the best one, after catching 80 passes and 11 touchdowns over the past two seasons. Even more impressive numbers when you consider the number of first-round wide receivers Alabama has had drafted the past two years: Henry Ruggs, Jerry Jeudy, DeVonta Smith, and Jaylen Waddle.

In our recent film study, we pointed out the accomplished receiver Harris was in school. So it’s logical to see the team continue to use those strengths now. Here’s how our Jonathan Heitritter summed up that element of his game:

“Najee Harris should be put in the same category, having the skill set to catch 50+ balls relatively easy in a 17-game season…who if used properly in OC Matt Canada’s system where he likes to move his backs all over the place, can legitimately catch 50-60 passes and top 1,500 all-purpose yards with 1,700 not being out of the question.”

Le’Veon Bell racked up receptions while the lead back in Pittsburgh, setting the franchise record for single-season receptions by a back in 2014 when he caught 83 balls and then breaking his own record in 2017 when he finished the year with 85. Harris may not reach those numbers but he may not be too far off either.

Of course, Harris probably won’t often be isolated as the X receiver with Diontae Johnson settling into that role. But in a rookie minicamp with a limited number of available players, the team is getting creative and an early look at how Harris can function moving around the formation. All things he did at Alabama, on tape, he looks natural standing up wide like a WR, which is one reason why the team felt confident about taking him at 24. He was an easy evaluation and NFL projection, especially for a team like Pittsburgh starving for talent at the position.

Harris will also hopefully improve Pittsburgh’s woeful screen game. Those issues have been on the offensive line as much as anyone but his power, quickness, and ability to create should make that aspect of the offense more successful too.