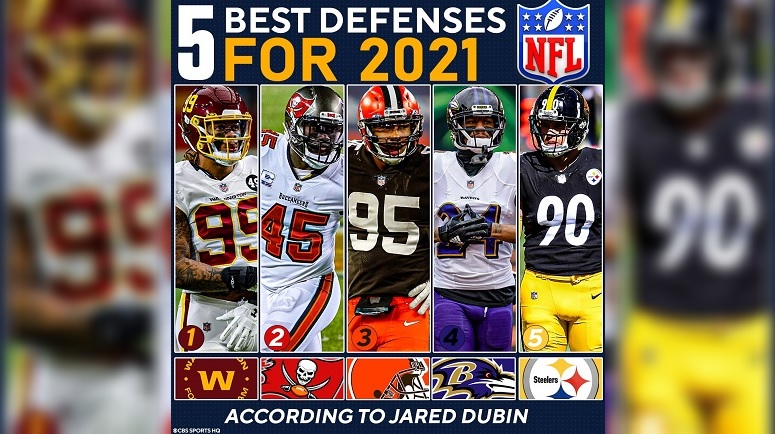 Which NFL teams will have the best defense in 2021, and will the Pittsburgh Steelers once again finish in the top 5 league-wide? Jared Dubin of CBS Sports has attempted to answer both of those questions as he recently released his top 10 defensive rankings of 2021.

Dubin has the Steelers ranked fifth overall in his top 10 defenses of 2021 rankings. Below is his reason for doing so.

Losing Bud Dupree hurts, but Alex Highsmith did a solid job filling in last season, and the Steelers picked up Quincy Roche in the sixth round, and he should help as well. He was underrated in the pre-draft process due to his being the third-best University of Miami edge guy in this class. Pittsburgh is also still just loaded with talent at all three levels, with T.J. Watt, Cameron Heyward, Stephon Tuitt, Tyson Alualu, Devin Bush, Vince Williams, Joe Haden, Minkah Fitzpatrick, Terrell Edmunds, Cameron Sutton, and Justin Layne all returning from last year’s team. The only real concern here is second unit depth, which has been sapped by the team’s cap constraints over these past few years.

Really, the concern with the Steelers’ defense mainly centers around the loss of three players from the team’s 2020 unit: Outside linebacker Bud Dupree, cornerback Steven Nelson and slot cornerback Mike Hilton. Dupree and Hilton both left the Steelers this offseason via free agency while Nelson was surprisingly cut outright just after the start of the new league year in March, on the heels of the team re-signing free agent cornerback Cameron Sutton. The Steelers also brought back inside linebacker Vince Williams after initially cutting him in March. It’s worth noting, however, that the Steelers will have inside linebacker Devin Bush back healthy in 2021 after he missed most of the 2020 season with a serious knee injury that required surgery.

As bullish as Dubin is on the Steelers’ 2021 defense, he is even more bullish when it comes to the units of the Cleveland Browns and Baltimore Ravens. He has both ranked right ahead of the Steelers at third and fourth overall. Dubin sure is expecting the Browns’ defense to make a huge jump in 2021 as last season Cleveland registered an ANY/A stat of 6.6, which had them in the top of the bottom half of the NFL last season in that key statistic.

As for Dubin having the Washington Football Team and the Tampa Bay Buccaneers as his two top-ranked defenses for 2021, respectively, that’s not overly surprising. Washington ended the 2020 season with an ANY/A stat of 4.8, while the Buccaneers weren’t too far behind with a stat of 5.8. The Steelers, by the way, registered an ANY/A stat of 4.7 in 2020. Only the Los Angeles Rams (4.6) had a lower number.

Outside of Dubin maybe being too bullish on the Browns, overall, his top 10 defensive rankings this early in the offseason look fine. Personally, I will be quite happy if the Steelers finish fifth overall in ANY/A in 2021, especially if they play a little better against the run than they did last season in the process. A top 5 Steelers defense in 2021 should allow them to be legitimate contenders for a playoff spot as long as the team’s offense can pull their weight a lot more than that unit did in 2020.