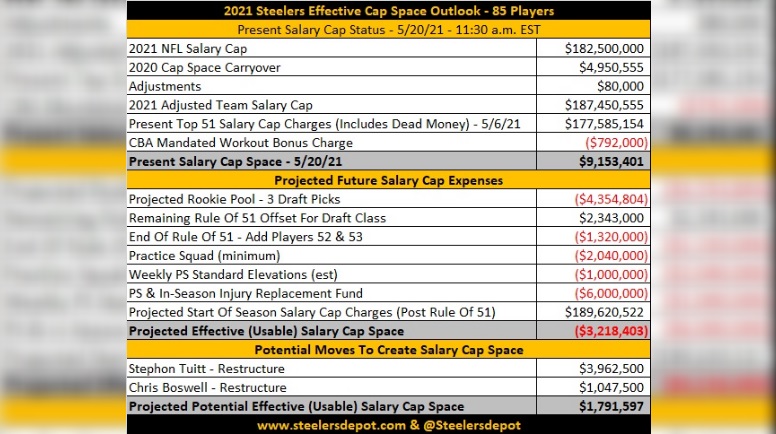 The Pittsburgh Steelers now have their 2021 rookie minicamp behind them and that event included the team signing six of their nine draft picks. Additionally, all eight of the team’s undrafted free agents have now been signed. The details of six of those players are now known. With several new contracts accounted for, it’s a perfect time to update where the team sits from a salary cap perspective for the 2021 season.

Let’s start first with what the NFLPA shows on Thursday morning for the Steelers. They now have the Steelers with 83 players under contract for the 2021 season, and the team $9,406,387 under the cap. The amount under and roster count is lagging behind to real-time, however, as the NFL has yet to process the signings of the Steelers’ draft picks and undrafted free agents to date.

As of Thursday morning, I have the contract numbers of all but five players currently on the Steelers’ 90-man roster. The lacking contract numbers that have yet to hit the NFLPA belong to the team’s top three draft picks, running back Najee Harris, tight end Pat Freiermuth and center Kendrick Green, in addition to undrafted free agents, wide receiver Rico Bussey Jr. and outside linebacker Jamar Watson. While those two undrafted free agents have indeed signed, we are still waiting for their signing bonus amounts to be reported. Neither, however, should impact the Steelers’ 2021 salary number by more than $3,000 each.

Based on the information that we do know from the NFLPA, the Steelers currently have a top 51 number of $177,585,154. That includes their dead money total of $18,767,127. The Steelers’ effective salary cap number for 2021 is $187,450,555. That amount includes their $4,950,555 rolled over cap space from 2020. Accounting for the 2021 offseason workout placeholder amount of $792,000, as noted above by the NFLPA, the Steelers currently sit $9,153,401 under the cap as of Thursday morning with 85 players accounted for and 87 officially under contract. It’s worth noting again at this point that the Steelers received an $80,000 cap credit in the middle of April for an old injury grievance that finally got settled. That is accounted for in my updated numbers, as well.

Below is the latest breakdown of the Steelers’ current and future cap situation. The breakdown includes approximated predictable future costs the team will have prior to the start of the 2021 regular season. The breakdown should be self-explanatory. These predicable costs include the remaining three unsigned draft picks, Harris, Freiermuth and Green.

As the chart shows below, the Steelers’ $9,153,401 in cap space that they currently have as of Thursday morning is already all spoken for, and then some. In fact, you can essentially say that the Steelers are $3,218,403 over the cap right now, based on predicted forthcoming costs the team will have between now and the start of the 2021 regular season.

As noted several times previously, the Steelers will likely restructure the contracts of defensive end Stephon Tuitt and kicker Chris Boswell at some point between now and the start of the 2021 regular season. Those two moves will free up a little more than $5 million when and if they happen. The team is also expected to sign outside linebacker T.J. Watt to an extension at some point during the summer. Such a transaction could potentially free up a little bit more of 2021 salary cap space, depending on the structure and new money amounts of the deal.

So, why do my numbers not match those on Over the Cap, who at the time of this post has the Steelers $9,337,076 under the cap? For starters, OTC is missing the $80,000 credit the Steelers received in the middle of April. Additionally, OTC is not accounting for the prorated bonus money of players that are not qualified to sit in the top 51, which is $193,675. They also do not have the Arthur Maulet contract accounted for yet, which puts them another $70,000 off. Account for those differences in the OTC numbers and you come out with the Steelers being $9,153,401 under the cap right now, like my numbers show.

The next Steelers salary cap update that I will provide will happen after the team has officially signed the rest of its draft picks. 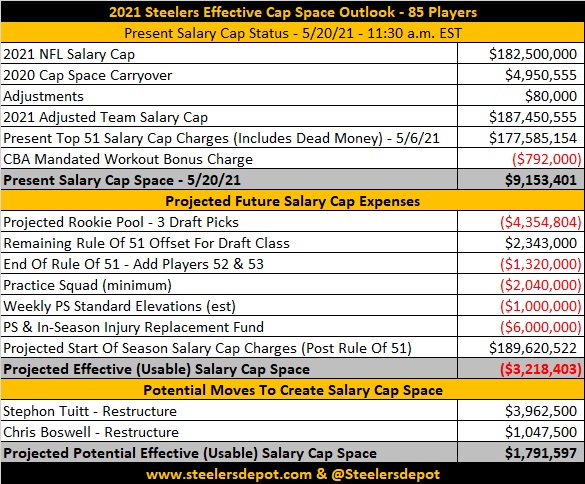