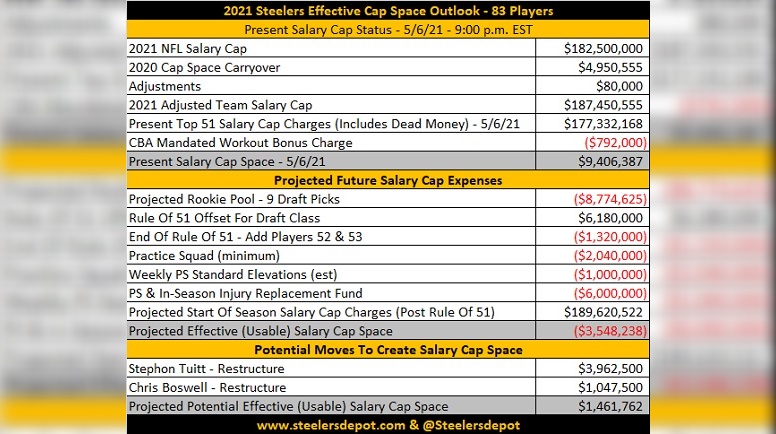 The Pittsburgh Steelers now have the 2021 NFL Draft behind them and this year they would up making nine total selections, which is one more than they were originally scheduled to make. With us now being one full week removed from the start of the 2021 NFL Draft, it’s a perfect time to update where the team sits from a salary cap perspective.

Let’s start first with what the NFLPA shows on Thursday morning for the Steelers. They now have the Steelers with 85 players under contract for the 2021 season, and the team $9,406,387 under the cap. The roster count is lagging behind to real-time, however, as the NFL has yet to process the waivings of punter Corliss Waitman and tight end Charles Jones. The numbers for the Steelers’ new nine draft picks along with cornerback DeMarkus Acy  are accounted for, though. That said, none of the nine draft picks have signed their rookie contracts yet.

The Thursday NFLPA update also includes the eight undrafted free agents the Steelers have reportedly agreed to terms to. None of those eight players have hit the NFL’s official transaction sheet as of Thursday morning. As far as real-time numbers go, the Steelers have 83 players technically accounted for by the NFLPA, and the team is indeed currently $9,406,387 under the cap.

The recent one-year extension signed by backup quarterback Mason Rudolph is also accounted for in the NFLPA data as of Wednesday morning.

As the chart shows below, the Steelers $9,406,387 in cap space that they currently have as of Thursday morning is already all spoken for, and then some. In fact, you can essentially say that the Steelers are $3,548,238 over the cap right now, based on predicted forthcoming costs the team will have between now and the start of the 2021 regular season.

As noted several times previously, the Steelers will likely restructure the contracts of defensive end Stephon Tuitt and kicker Chris Boswell at some point between now and the start of the 2021 regular season. Those two moves will free up a little more than $5 million when and if they happen. The team is also expected to sign outside linebacker T.J. Watt to an extension at some point during the summer. Such a transaction could potentially free up a little bit more of 2021 salary cap space, depending on the structure and new money amounts of the deal.

The next Steelers salary cap update that I will provide will happen after the team has officially signed their undrafted free agents. That should be the middle of next week. 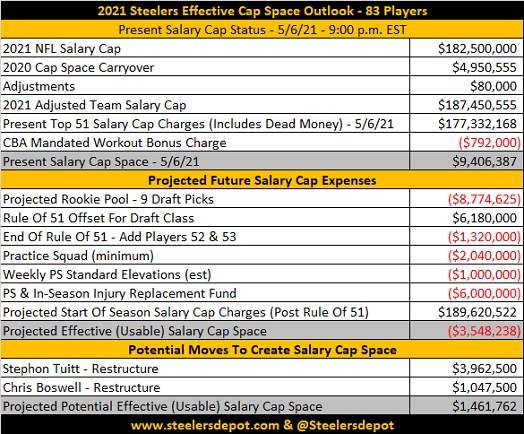