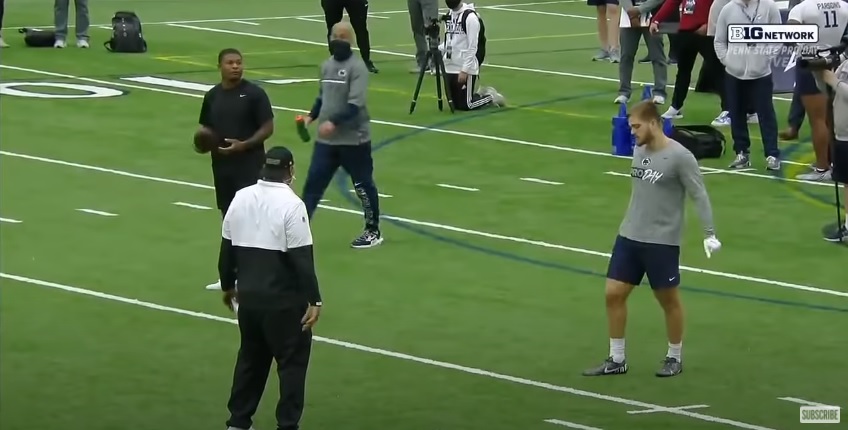 Putting the final touches on reviewing the Pittsburgh Steelers’ 2021 draft class, I wanted to take a look back at our Pro Day tracker and see how it matched up against the team’s nine draft picks. Extensive as our tracker is, we don’t have all of the Steelers’ Pro Day information. But it’s as good of a list as you’re going to find. And Pro Day attendance meant even more in a year without an in-person NFL Combine.

So let’s see who, if anyone, attended the Pro Days of this year’s class.

Analysis: In keeping with history, the Steelers sent the house to Alabama’s Pro Day. In part, sure, because they had more prospects than any other school, and partly due to having two Pro Days that allowed a total of six members of the organization to attend instead of just three.

The team’s streak of having Kevin Colbert and/or Mike Tomlin at their first-round pick’s Pro Day lives on. It’s now happened for 11 straight years, 2010-2021 (with 2020 being an exception since the team didn’t have a first-round pick). In addition to the big decision-makers, RBs coach Eddie Faulkner put Harris through drills during his workout. Harris also confirmed a Zoom call with the team, including Tomlin and Colbert. So plenty of obvious interest for the team’s first round pick. Unlike some teams, Steelers are never coy about the top guys they’re interested in.

Analysis: Tomlin, Colbert, and the position coach attended the Nittany Lions’ Pro Day. Roberts put Freiermuth through extensive drills and Freiermuth noted in his Pro Day presser he had regularly spoken with Roberts. Like Harris, Freiermuth was one of the most obvious prospects the team was interested in. He also confirmed a Zoom call with Tomlin and the front office in the pre-draft process.

Analysis: Initially, I thought assistant OLBs Coach Denzel Martin was at Illinois’ Pro Day. But right before the draft, a reader pointed out the Steelers’ representative putting Green through drills and we concluded it was actually Klemm. Klemm confirmed as much after the team made the pick. Green also had at least one pre-draft Zoom call with Tomlin and Colbert.

Analysis: When it came to Aggie linemen, my focus was on RT Carson Green. But the team ultimately took LT Dan Moore Jr. We know Morgan put them through drills, as I pointed out on March 30th.

So the team’s ultimate selection of Moore Jr. ultimately isn’t surprising given Morgan’s attendance, even though I’ll admit he wasn’t a name super high on my radar.

Analysis: This is the first draft pick where we don’t have any obvious Pro Day connection. It’s certainly possible another member of the Steelers joined Morgan but I wasn’t able to find any of that combing through the Aggies’ Pro Day.

Analysis: Pittsburgh made the aggressive move to trade up for Loudermilk, bridging the gap between their final fourth round pick (#140) and their sixth round selection (#216). Aside from having the size and scheme fit, there weren’t many alarm bells of pre-draft interest. It didn’t help that Loudermilk wasn’t invited to any of the pre-draft All-Star events like the Senior Bowl. He didn’t even snag a Combine invite, not that it mattered much in 2021.

The only personnel member we know who attended the Badgers’ Pro Day was area scout Dave Petett, who typically covers the North/Northeast. Wisconsin didn’t have many marquee prospects in this draft class so it isn’t a shock to see the team appear to send only an area scout.

Analysis: The first and only Pro Day of the Steelers’ picks where we don’t know any specific personnel who attended. We know the team was there but could not identify the individual member who attended. The only two names we can eliminate are RBs Coach Eddie Faulkner and Area Scout Mark Gorscak because we identified those two at other locations that day. But that leaves plenty of possible names. We can also rule out Mike Tomlin and Kevin Colbert. Colbert confirmed they traveled to nine Pro Days, which matches our pre-draft count.

Analysis: We know Chris Morgan and one other personnel member (it was not Teryl Austin or Grady Brown — if you can identify the person, have at it) attended. Nothing that has a direct link to Norwood. We do know the team, including Colbert, interviewed Norwood at this year’s Senior Bowl.

Still, he, Roche, and Brown are the draft picks we know the least about in regards to Pro Days.

Analysis: Finally, Harvin III came on our radar after Smith attended his Pro Day workout. It was one of two Pro Days he attended with one of the draft’s top punters (Kentucky and Max Duffy was the other). So Smith’s attendance made this connection clear and I included Harvin III in the seventh round of my final mock draft. It’s hard to call your shot on a specialist but this year made it relatively easy.

Of the team’s nine picks, we know at least five of them had a position coach attend their Pro Day workout. That included their top four selections. Two picks had Tomlin and Colbert attend — Harris and Freiermuth.

Generally speaking, these results are about as expected. Steelers sent the big wigs for early picks, especially the first-rounder, with positional coaches working out guys beyond that. Things did get light heading into Day 3 with only two of the team’s six selections having a coach at their Pro Day (that we know of).