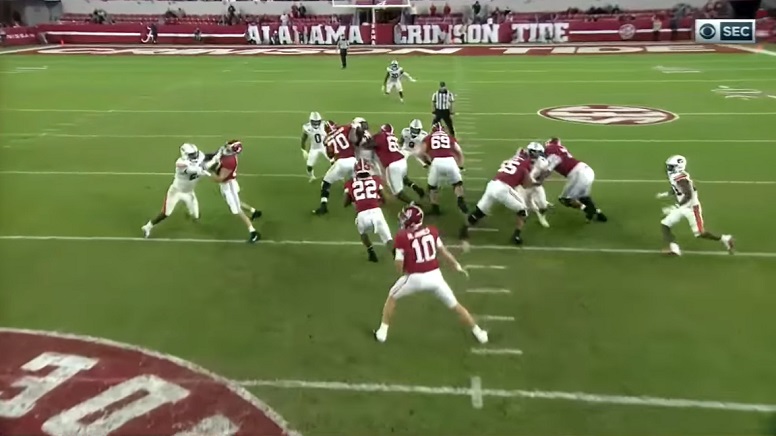 Ahead of the 2021 NFL Draft taking place, Pittsburg Steelers wide receiver JuJu Smith-Schuster made it clear that he hoped the team would ultimately select former Alabama running back Najee Harris in the first round. Smith-Schuster ultimately got his wish as the Steelers picked Harris 24th overall in the first round. Since the Harris selection was made on Thursday night, Smith-Schuster has talked about the team having the former Alabama running back on the team now, and what that means.

“I think he changes it tremendously,” Smith-Schuster told Cody Benjamin of CBS Sports in an interview. “You know, we lost a teammate in James Conner. And (Najee’s) a guy that’s been on the big stage. Coach T [Mike Tomlin] actually called me about it, told me to reach out to him, and I told Coach T, ‘Finally, you drafted an offensive player in the first round.’ Because our defense, there’s at least eight to 10 first-rounders there. So, it’ll be great.”

Hopefully the fact that the Steelers did invest a first round draft pick in the running back position will indeed help the offense dramatically in 2021. Especially when it comes to the running game, which been near or at the bottom of the NFL in several statistical rankings the last several seasons. Harris was a beast at Alabama and regarded by many as the top running back in this year’s draft class. Because of that, he should start right out of the chute and greatly impact the running game in Pittsburgh.

“Coach Matt, he’s definitely a guy I talked to a lot (last year), just discussing certain plays we should’ve called last season,” Smith-Schuster said of Canada. “Even these first two weeks of install, we’ve been getting into it — a lot of motions, a lot of different stuff, moving guys around. And with him, you gotta know all positions, too, you can’t just know one spot.”

It will be interesting to see how much the addition of Harris this year via the draft ultimately helps Smith-Schuster in 2021. Smith-Schuster, the Steelers’ former second round draft pick out of USC, caught 97 passes for 831 yards and nine touchdowns in the 16 regular season games. In the lone playoff game against the Cleveland Browns, he caught another 13 passes for 157 yards and a touchdown. While not awful numbers overall, Smith-Schuster’s average depth of target in 2020 was just 5.8 yards. That number, just like his average yards per reception stat from 2020, must go back up in 2021. Hopefully the addition of Harris will play a role in that coming to fruition.