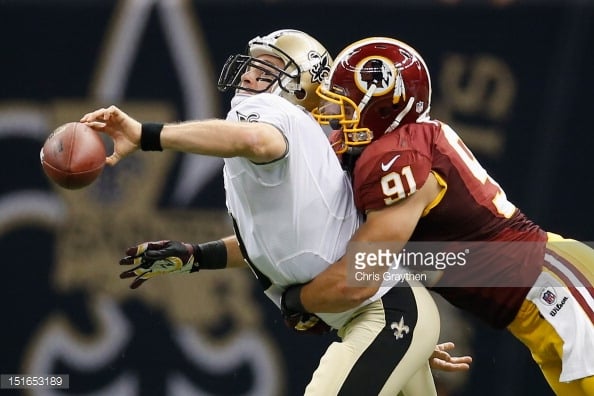 Veteran pass rusher Ryan Kerrigan is staying in the NFC East, signing a deal with the Philadelphia Eagles. The Pittsburgh Steelers reportedly made a push for him to join the AFC North. According to ESPN’s Adam Schefter, the Steelers were one of the three teams who made an effort to sign Kerrigan.

Teams that showed the most interest in Ryan Kerrigan were the Eagles, Steelers and Bengals. But he opted to stay in NFC East. https://t.co/hIopweFdDA

Washington let Kerrigan go after spending his first 10 seasons with the team. He announced his signing with the Eagles via Instagram Monday morning.

Here is the post from Kerrigan, who recently visited the #Eagles. https://t.co/iSzuLeOrZZ pic.twitter.com/Yls3MgW4KE

A former first round pick in 2011, Kerrigan’s had a strong, consistent career: 95.5 career sacks with at least 5.5 in every season, hitting that number in each of the past two years. He’s also been durable and available, missing only four games in his career, all coming in 2019.

Turning 33 in August, he would’ve been much older than the typical outside defensive free agent the Steelers sign, but he would’ve provided excellent and much-needed depth behind T.J. Watt and Alex Highsmith. This is perhaps a sign the Steelers aren’t done adding EDGE rushers, though the list of available names aren’t impressive. Kerrigan was arguably the best of the bunch. Currently, the team projects to have sixth round rookie Quincy Roche and Cassius Marsh as their backup outside linebackers.